We were approaching the end of our stay in Kuala Lumpur and hadn’t really taken the time to visit some of the sightseeing opportunities. There isn’t particularly much to see in KL, but the Batu Caves and the KL Tower were two things we didn’t want to miss. Jurn, Daniel, and I decided to visit both.

I knew very little about the Batu Caves. I only knew that they are a series of fairly large caves with a temple inside. A years ago or so, I briefly saw a short clip filmed at the Batu Caves (first 42 seconds), but hadn’t realised what it was because they filmed the intro to their Bali video in Kuala Lumpur. I didn’t look the place up or anything before we went there, so I had no idea what to expect.

The Batu Caves are 14km away from the city center. They are supposedly accessible by train, but it turned out to be cheaper for us to take a Grab given the cheap prices and the fact that we would be splitting the cost across three people. We decided to visit on the 15th February 2019. When we arrived, it was instantly familiar to me because of The Budgeteer’s video that I mentioned, but I couldn’t place my finger on why until later. 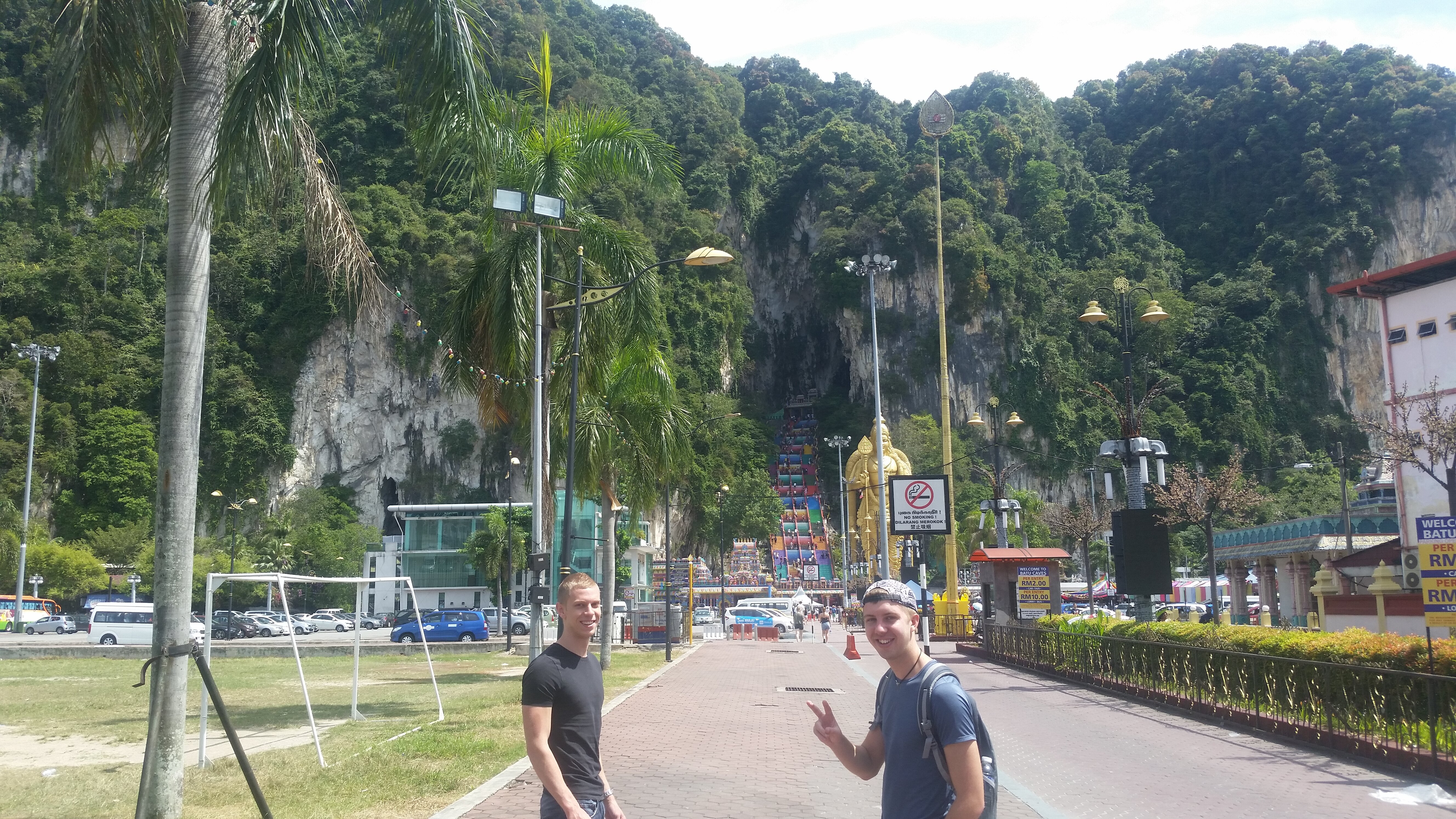 We arrive at Batu Caves.

The Batu Caves are in the side of what is essentially a sheer cliff face that just pops out of the ground. There are some other parts that we didn’t visit nor know about, but the part we visited had a giant statue of the Hindu god of war outside and steep, brightly coloured concrete steps up to the caves. 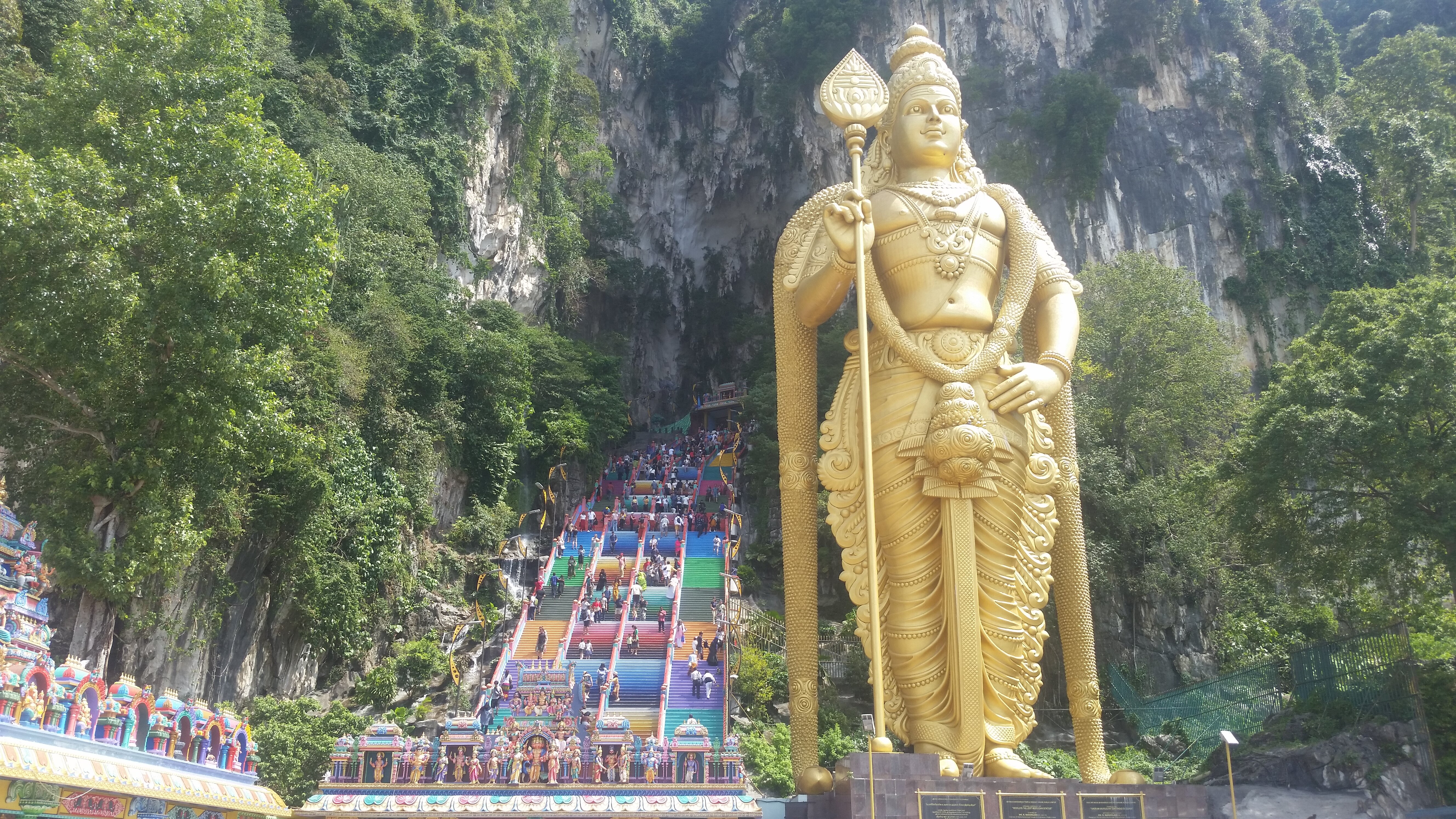 To the left of the steps is a large, fairly empty, temple-like structure that is clearly accessible somehow but that we didn’t see a clear way to enter. People were moving around inside. We weren’t really interested in visiting the temple itself, rather the caves, so we ignored it and moved on. 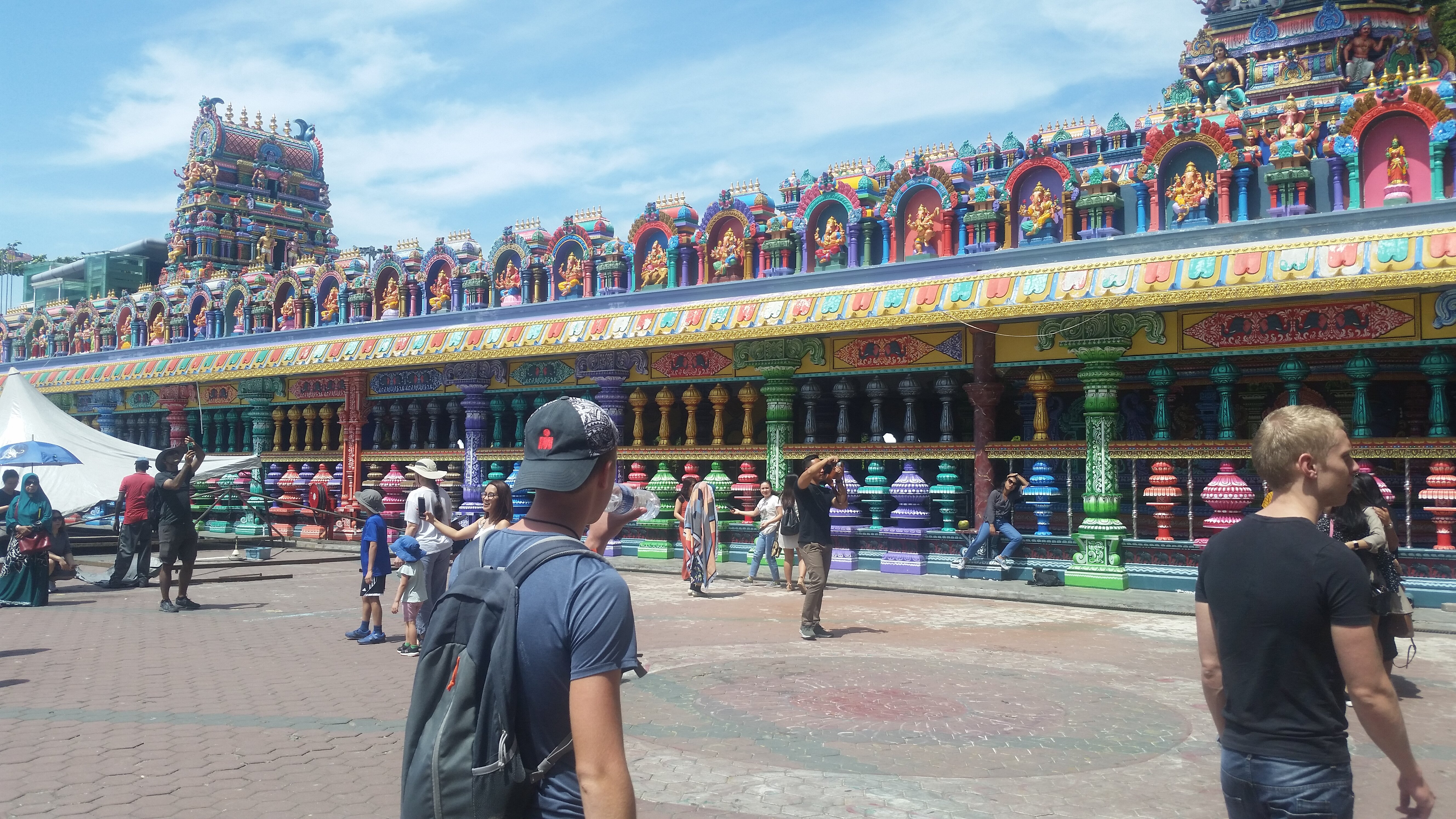 The temple to the left of the stairs.

To the right of the steps was a set of a fake rocks that was being climbed on by a family of monkeys! The monkeys were clearly very adjusted to humans and you could approach them with no troubles. They were eating fruits out of a carrier bag someone had left for them and they would occasionally fight with each other. 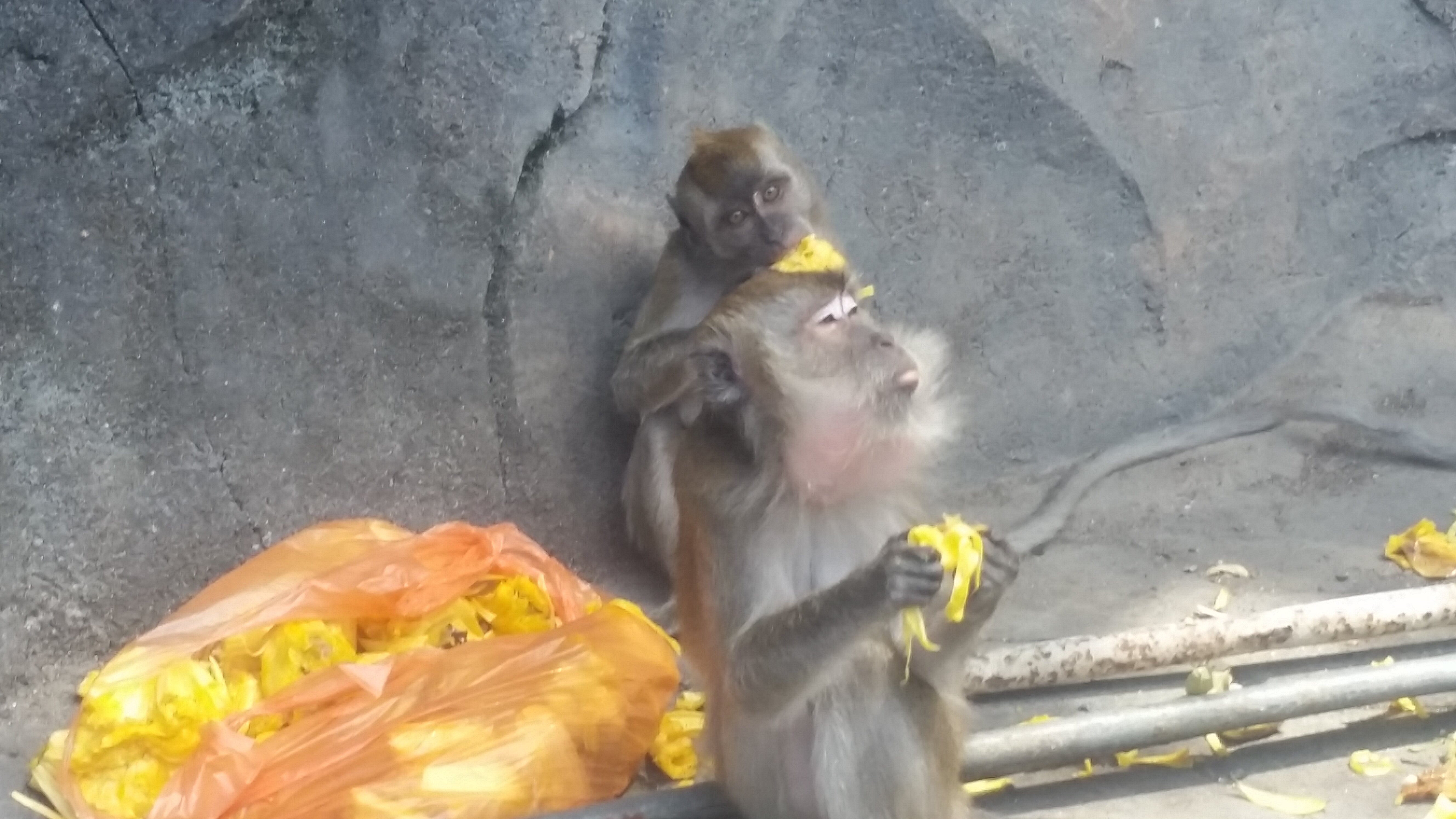 At the base of the steps was a small decorated archway crowded with people. It was hard to tell quite what was going on, but it seemed like they were trying to check people’s bags on the way up. There were lots of hawkers selling all kinds of souvenirs, trinkets, sunglasses, etc, and a more permanent stand selling refreshments. We did our best to avoid encountering those people and just make our way up the stairs. 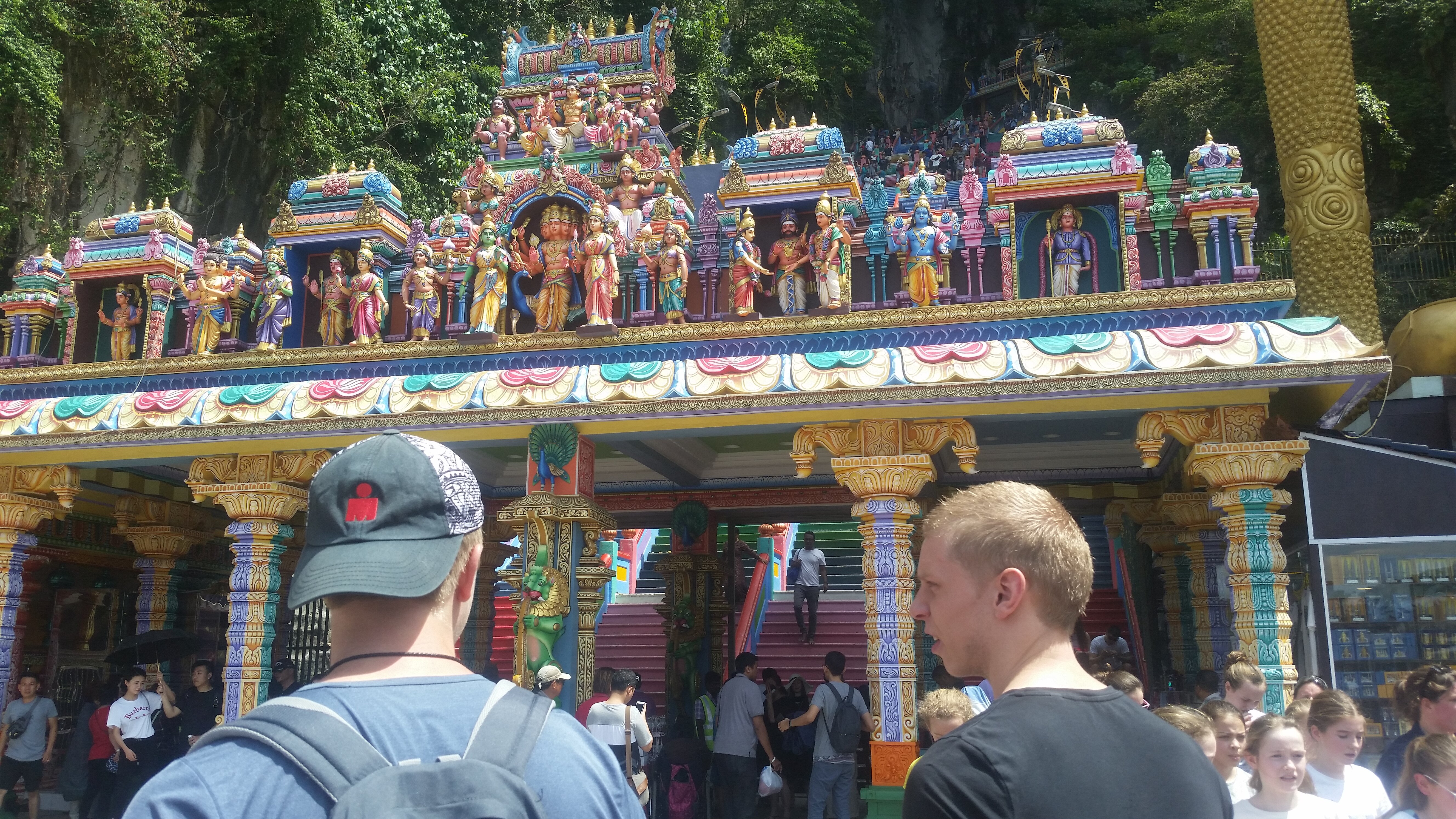 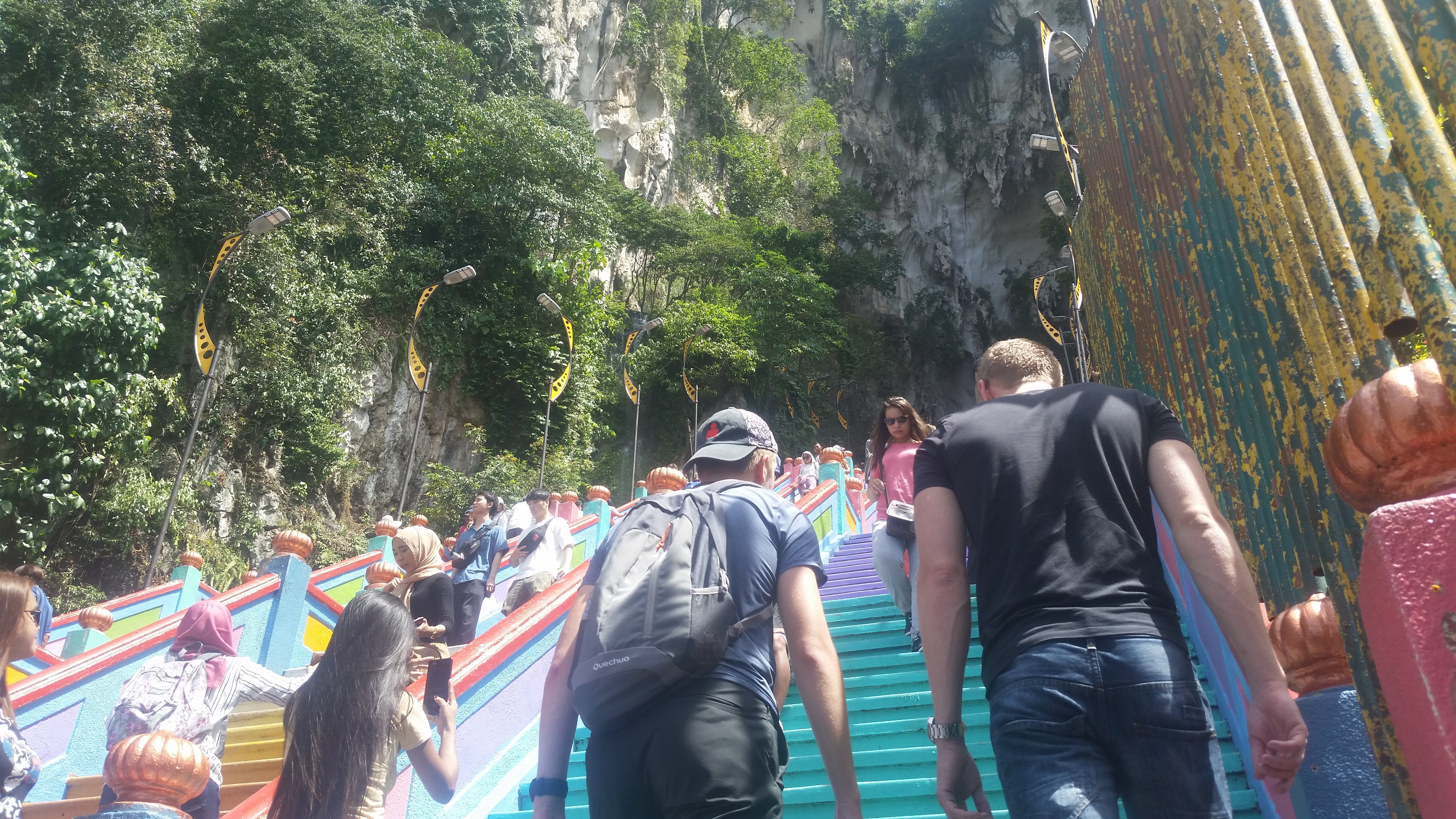 There were even more monkeys on the stairs. I even saw a baby monkey hanging on to the stomach of it’s mother/father as it ran along. 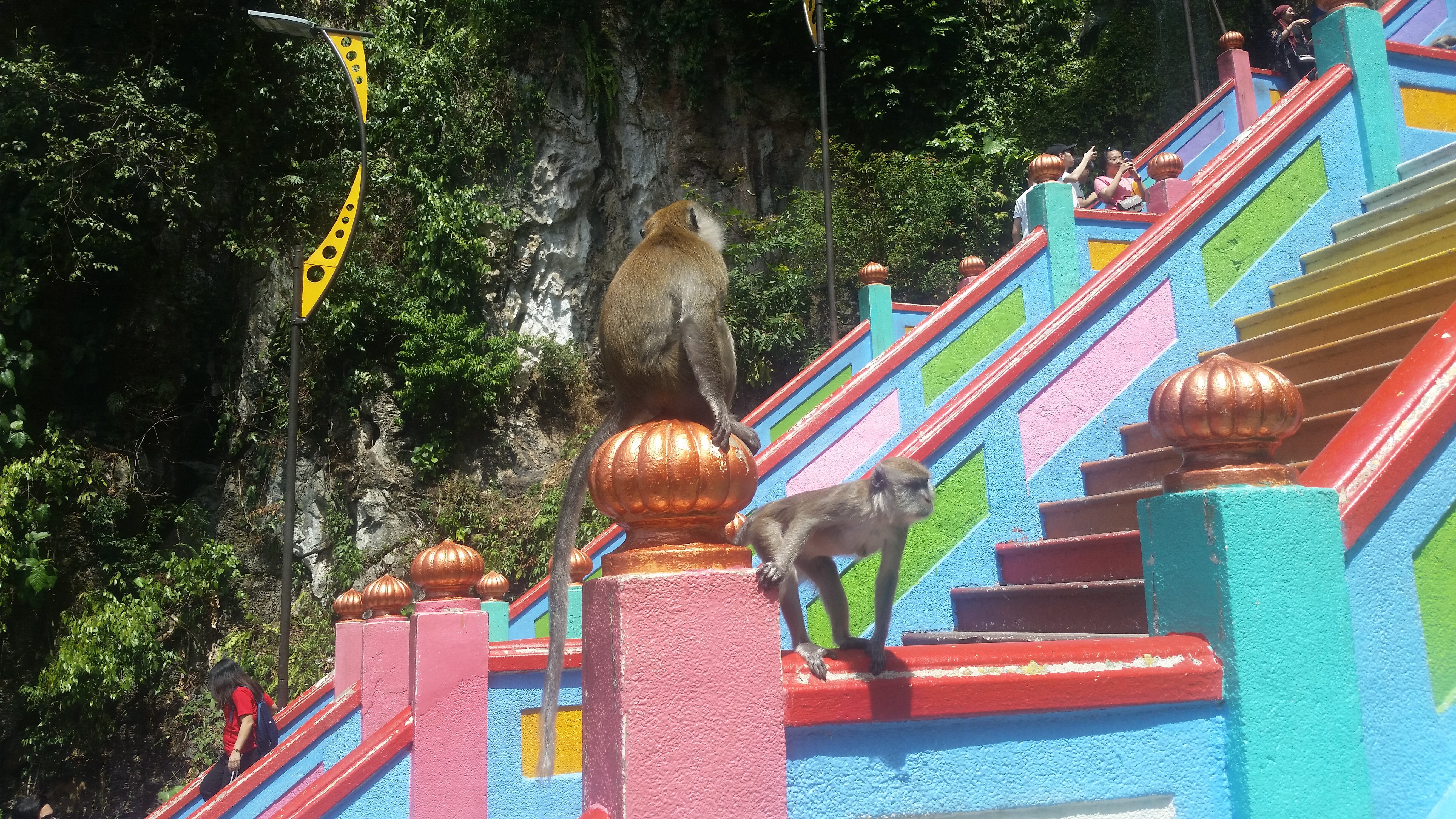 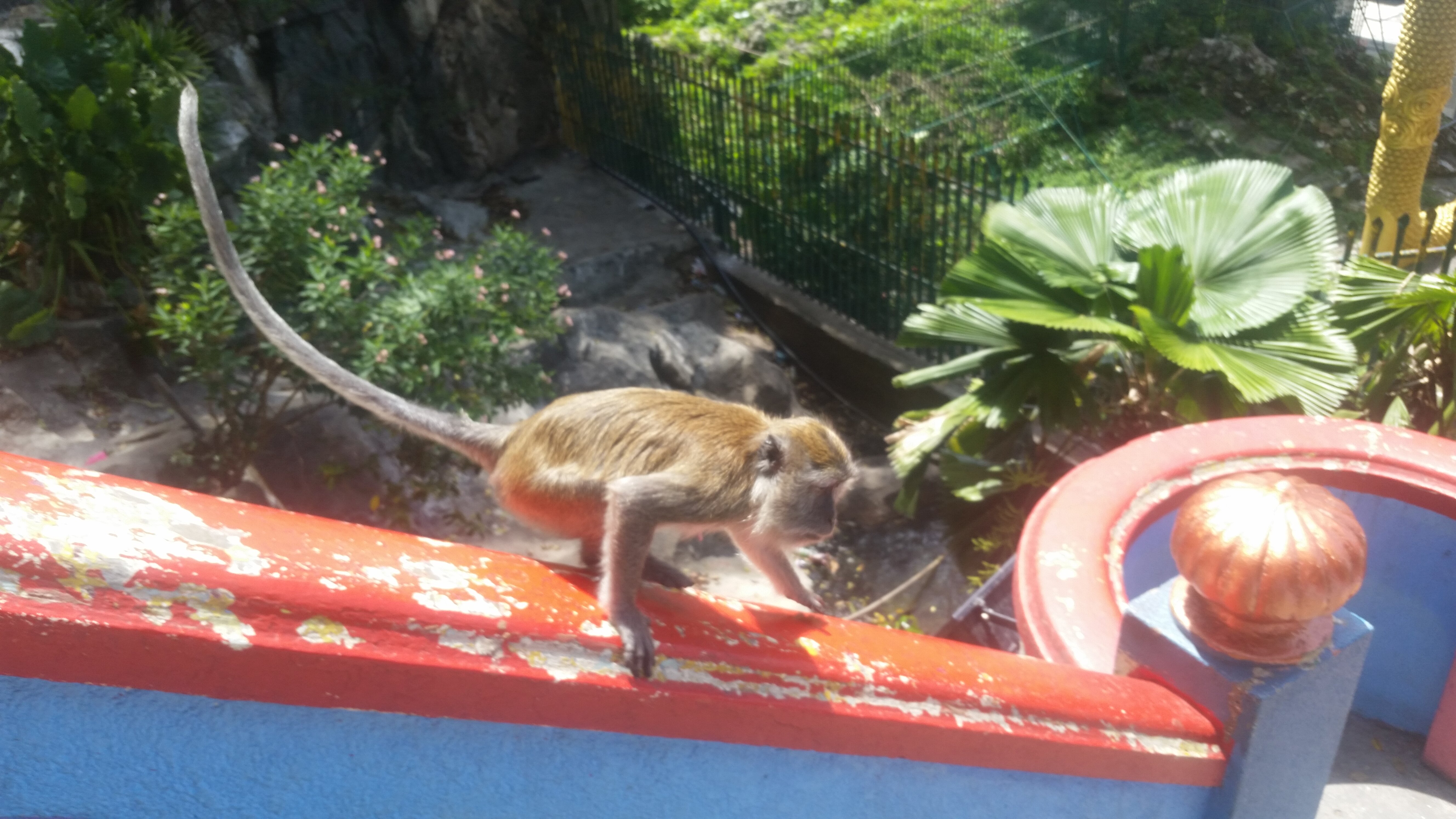 To the left of the stairs was a small waterfall. 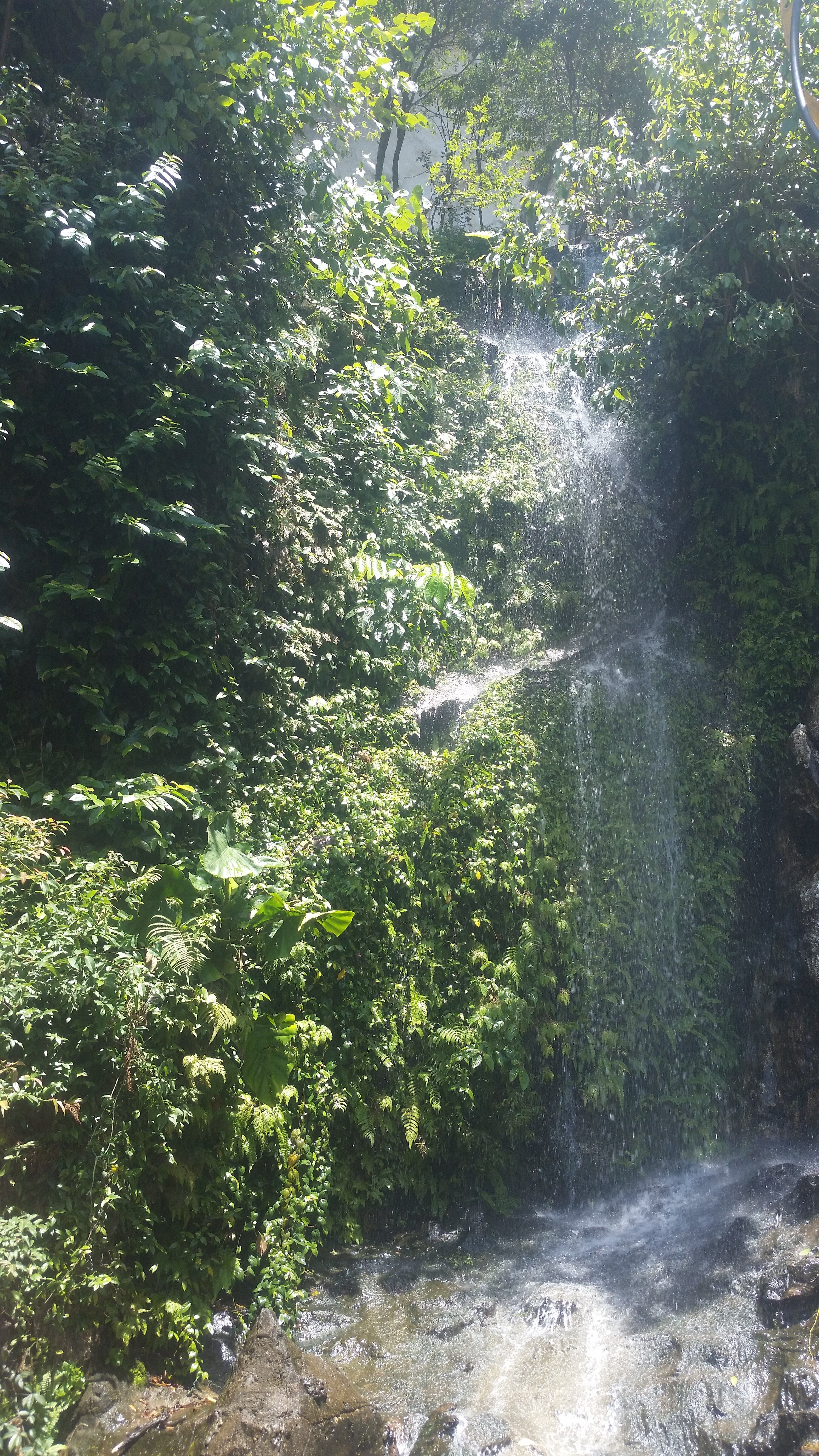 The stairs are fairly steep and tough, and because of the heat of the climate and the humidity, you’ll be sweating hard by the time you get to the top. We actually saw a woman being carried down the stairs on a stretcher, so I think for some it might be too difficult. Part way up the stairs, there is a path that goes to another cave on the left, but it was gated and locked when we visited. At the very top of the stairs is another archway similar to the one at the base of the stairs, though this one is thankfully vendor-free. 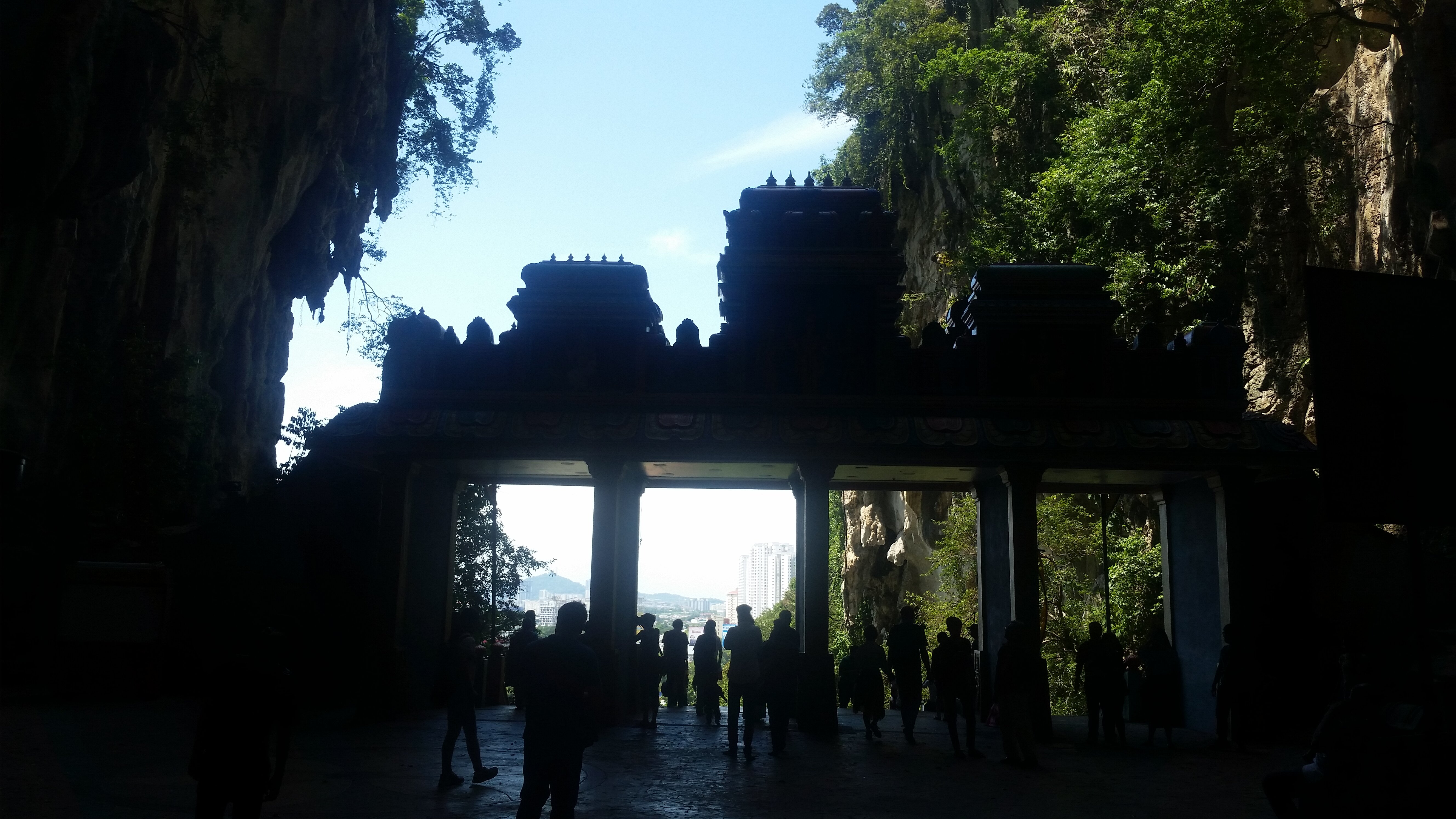 Looking back at the city through the archway at the top of the stairs. 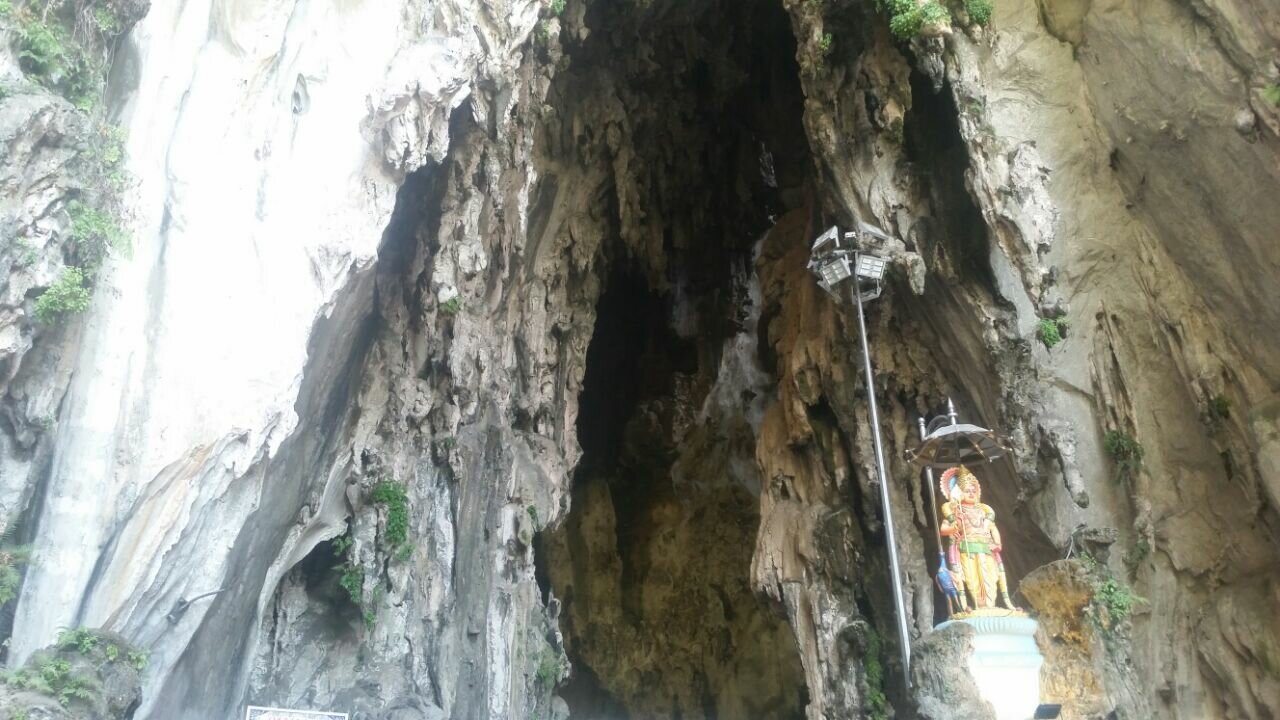 Inside the mouth of the cave at the top of the stairs.

As you enter the caves, you start to descend again and you’re suddenly in this huge open cave. They have ruined it. The floor has been made into concrete, there are concrete sculptures everywhere, and giant light poles. The Hindu temple was built in the 1920s, and honestly I don’t care about it at all. It feels like the Disneyland version of a temple inside a cave - inauthentic trash that has ruined the original natural beauty of the site. 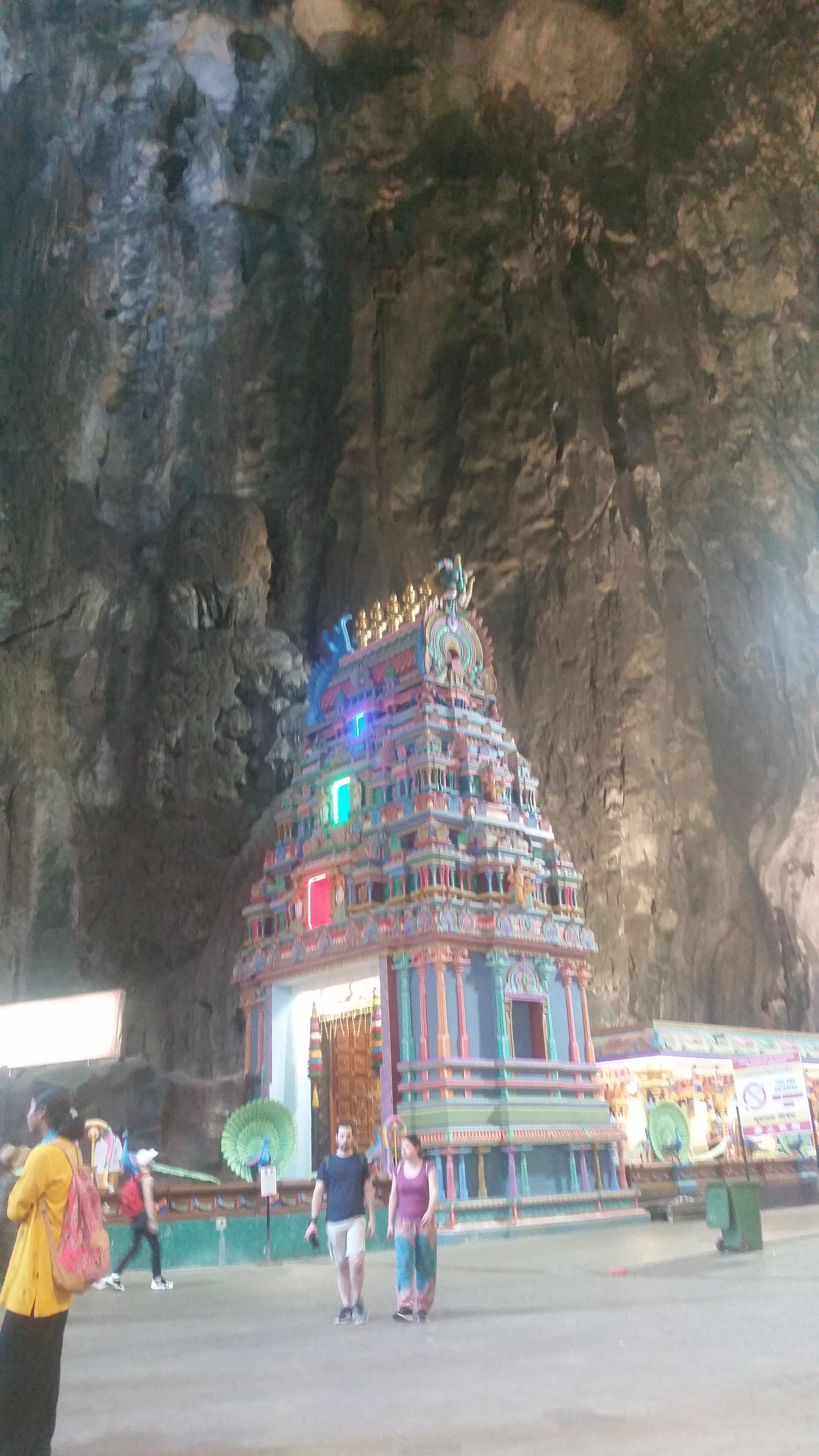 The Hindu temple inside the cave.

There’s a ticket office in the middle of the temple, which makes me think it can’t be much of a temple. We just stayed in the cave and as far as we could tell, you were buying a ticket just to enter a single room. Trash. 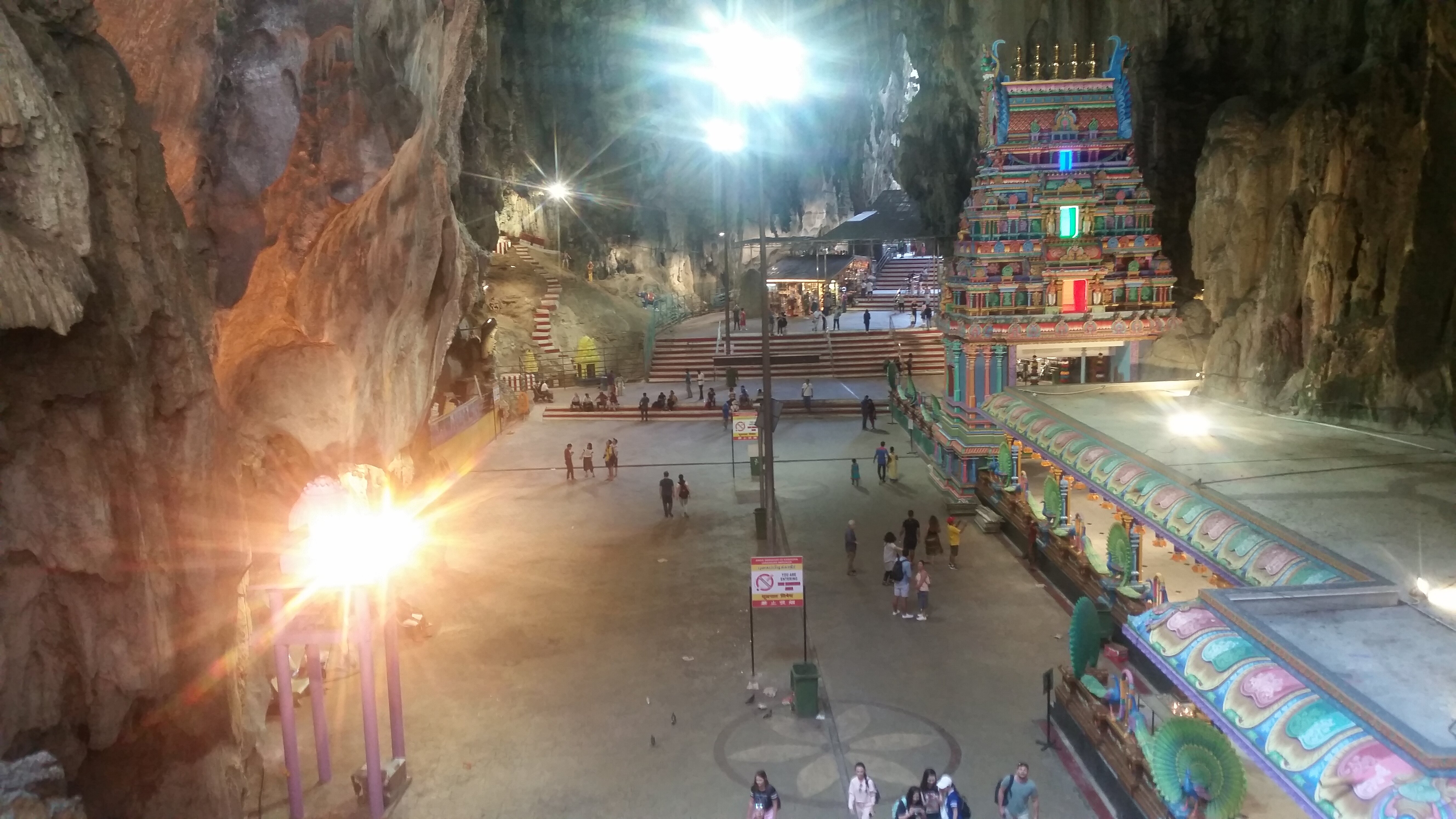 The inner cave, looking back towards the entrance.

We moved on and went deeper into the cave, and this part I was impressed by. The third and final portion of the cave had an open roof and lots of greenery. This portion reminded me of many things; but the ones I would relate it to most closely would be the Sierra de Chiapas level in Serious Sam; or some of the scenes from Avatar (2009). 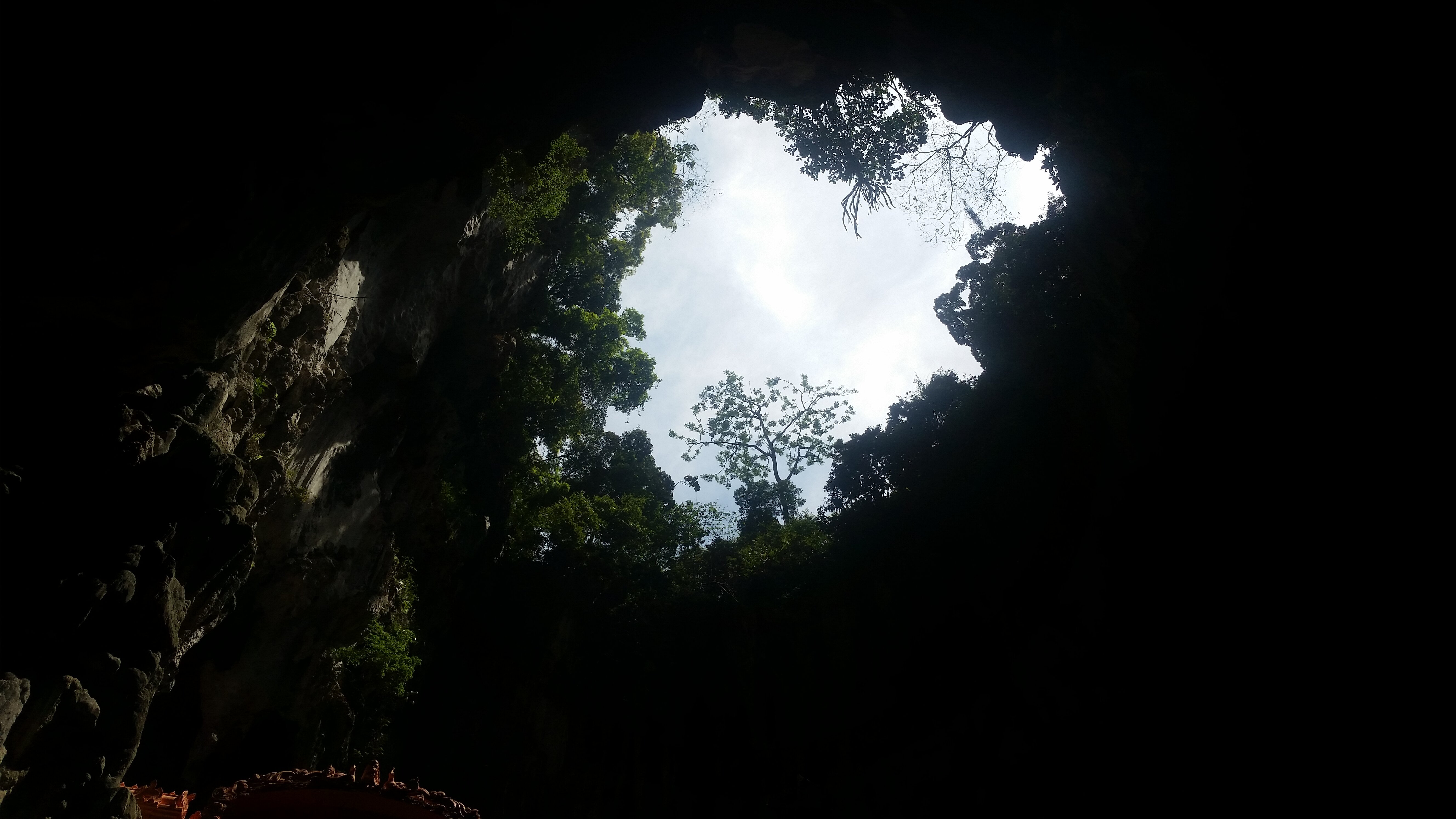 The open top to the innermost cave.

The base of the walls here slope inward at the edges on one side, and there are more monkeys there. There were also two chickens and a lot of pidgeons too. Part of the wall has foliage growing all the way up, and the monkeys were swinging around every which way and climbing up a near vertical slope. 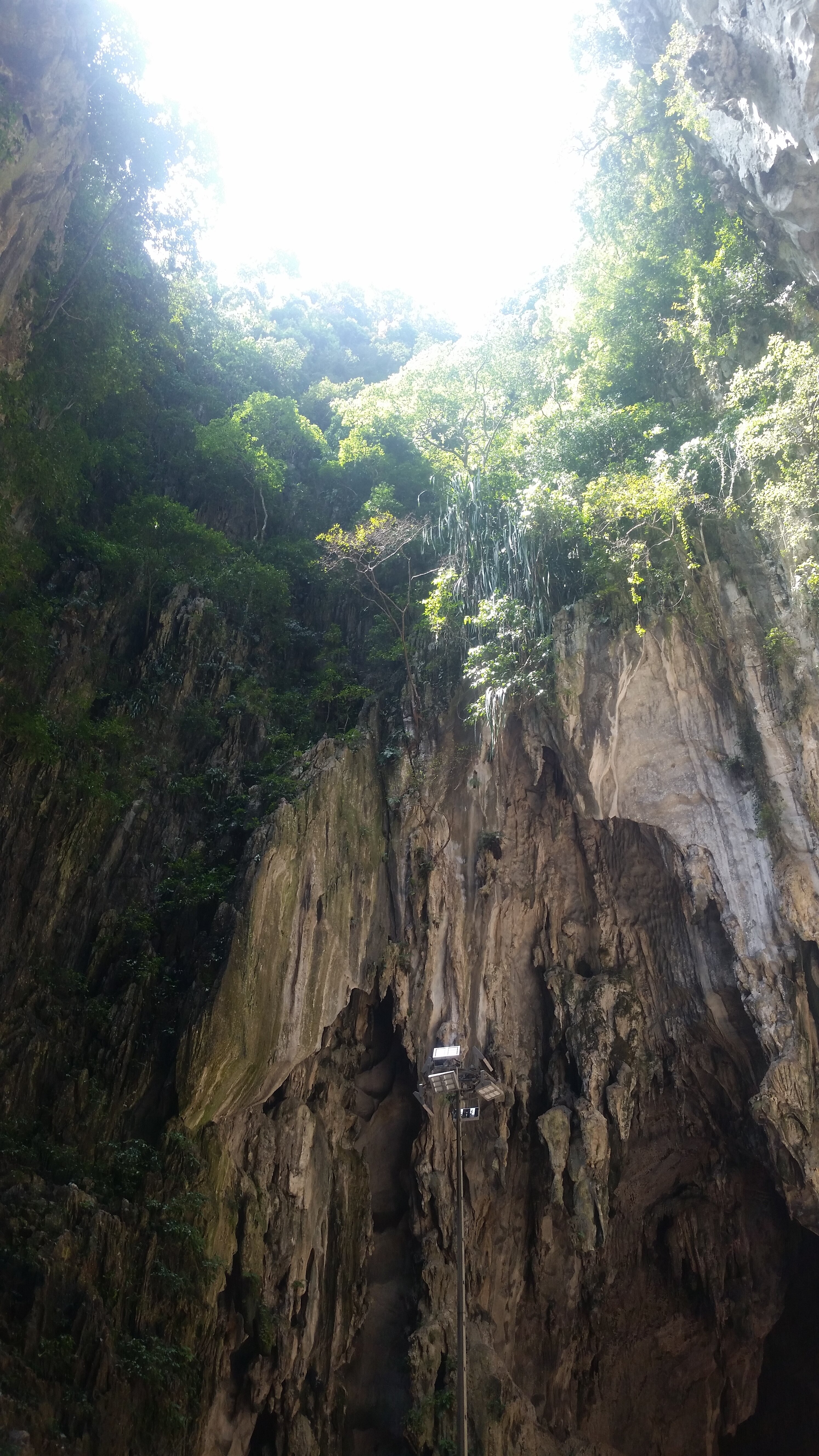 Foliage growing on the cave wall. The trees at the top were rustling as the monkeys moved. 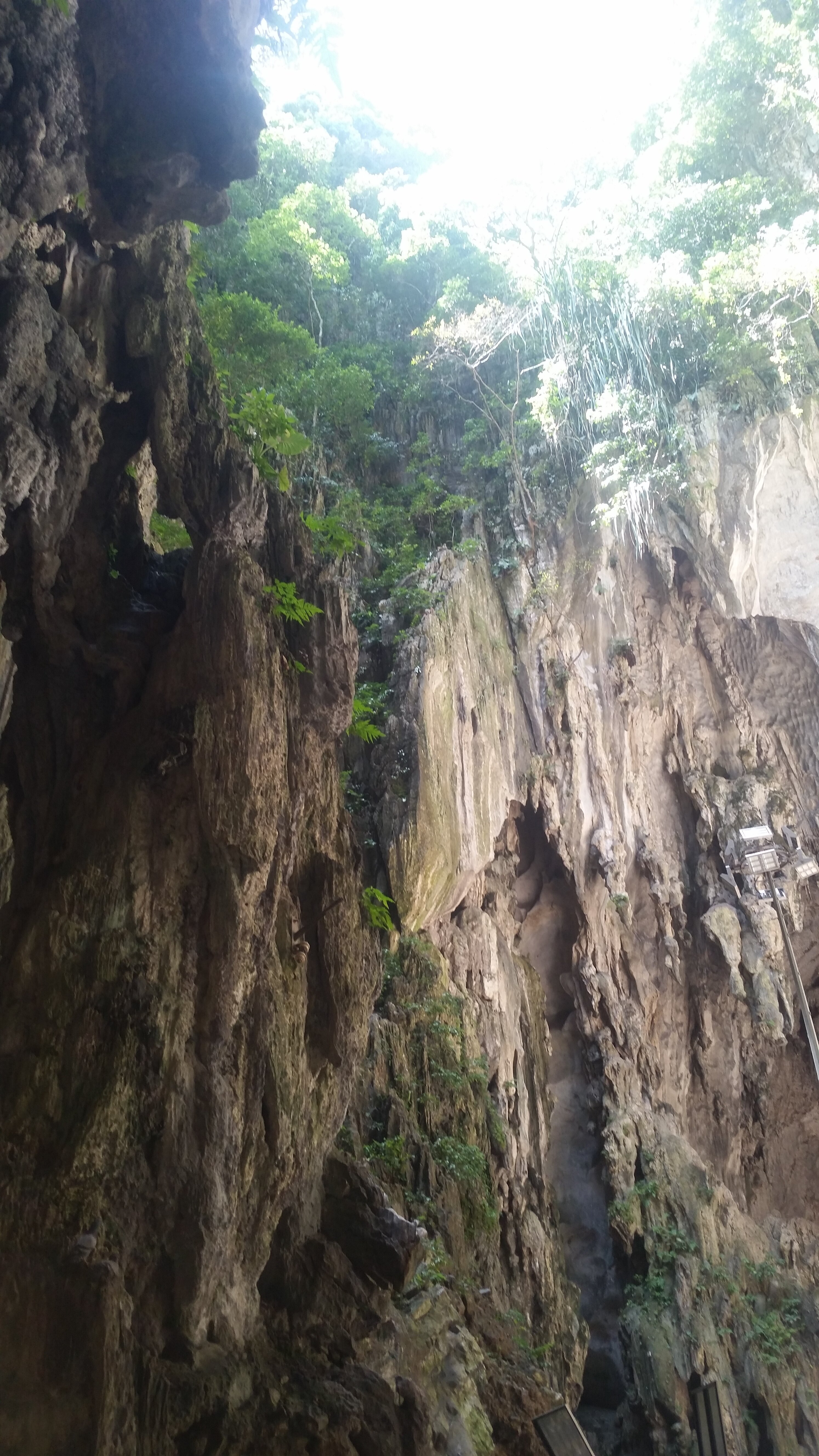 Alternate angle of the previous image.

On the other side, the walls slope overhead as if they were going to form a roof, but then it opens up. Where the roof slopes over, many stalactites are growing. 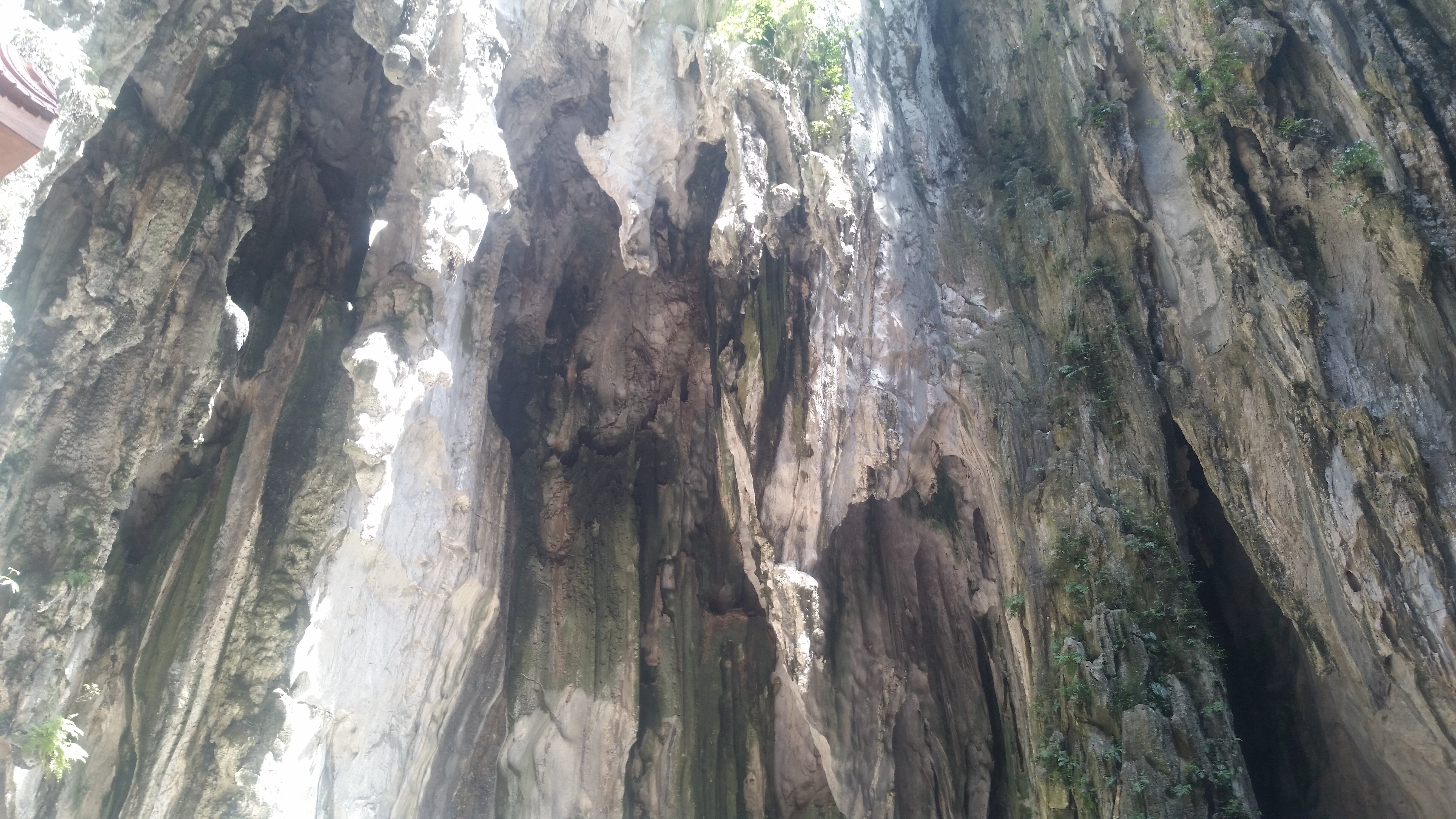 Stalactites growing on the cave wall. 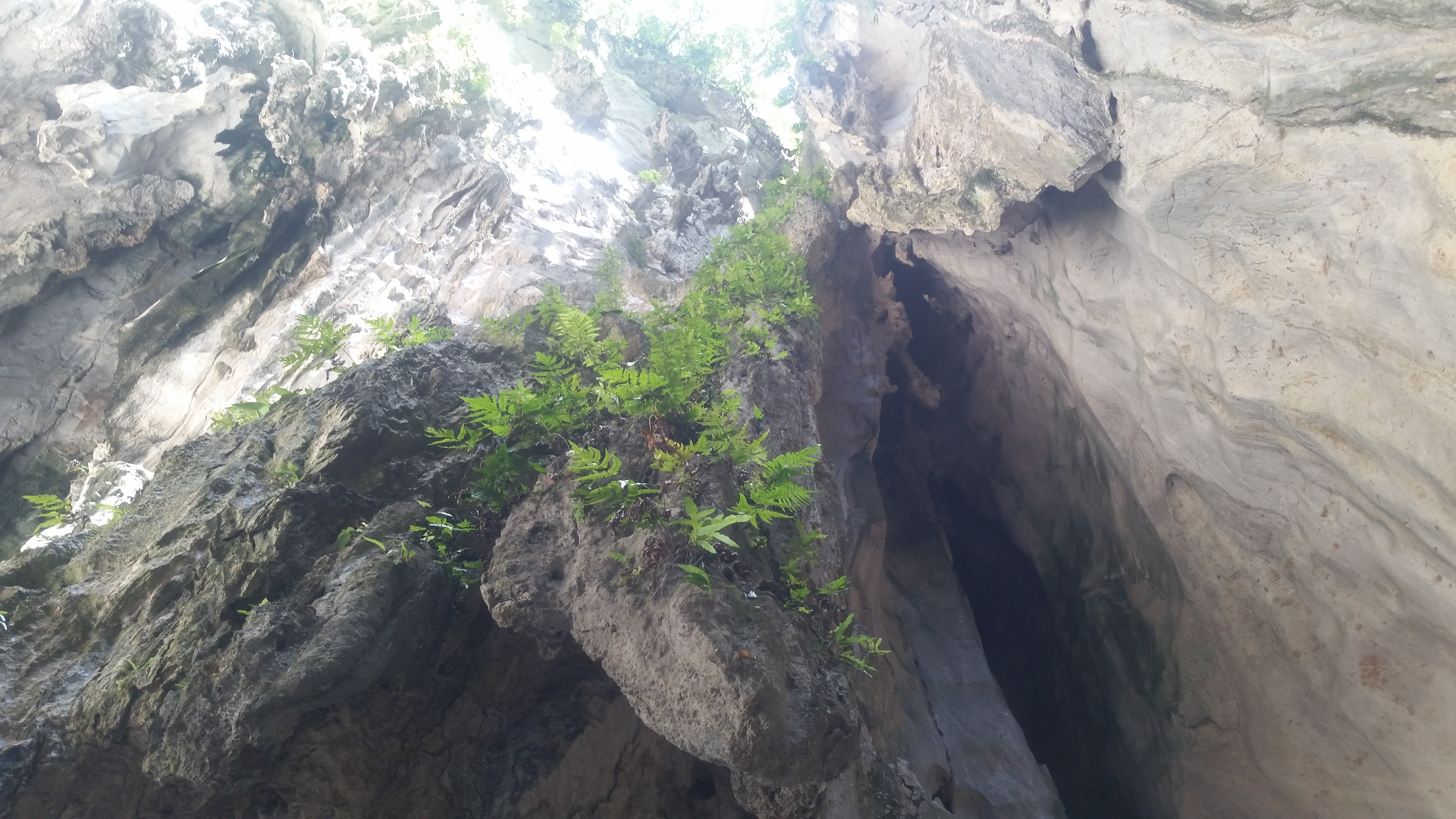 Looking up at a stalactite with growing foliage.

In the center of the room is another ‘temple’. It was tiny, had ceiling fans, and constantly had a guy ringing a bell. I was so unimpressed with it that I didn’t even take a picture of it. I was more interested in the monkeys.

At one point, I opened my backpack to take out some food and a monkey ran over and was beginning to beg to me, standing straight upright with his hands out above his head. It was like he was saying “Give it to me bro!”, and it was quite funny. I put my food back in my bag to make him go away, but he kept a close watch until I went away.

Elsewhere, two monkeys had somehow stolen two bottles full of juice from humans. One ran off up to a perch high up the wall with his, but another was actually able to open the bottle. He pushed the bottle on to the floor so that the liquid was pouring out, then he lay next to it so that his face was by the opening and tilted the bottle to drink. It was amazing to watch.

I liked the Batu Caves because of the natural parts and because of the monkeys. I would have appreciated it more if there was less human intervention.

We initially planned to visit KL Tower on the same day that we visited Batu Caves, but by the time we had gotten back from the caves, had a swim at Jurn’s apartment, and eaten dinner, it was too late to really consider the visit. We decided to put it off until the subsequent day, but then it rained and thundered repeatedly, so we ended up visiting two days later on February 17th.

Even though the Petronas Towers are 30m taller (and a more famous landmark given that they were once the joint tallest buildings in the world (tied with each other)), we decided to visit KL tower because the Sky Deck viewing platform is higher than the equivalent Petronas Tower observation deck, and with KL Tower’s Sky Deck, you are outside.

The KL Tower is quite the landmark. It’s the 7th tallest free-standing tower in the world. You can see it from all over. It often has some kind of light show going on, where the whole building changes colours. 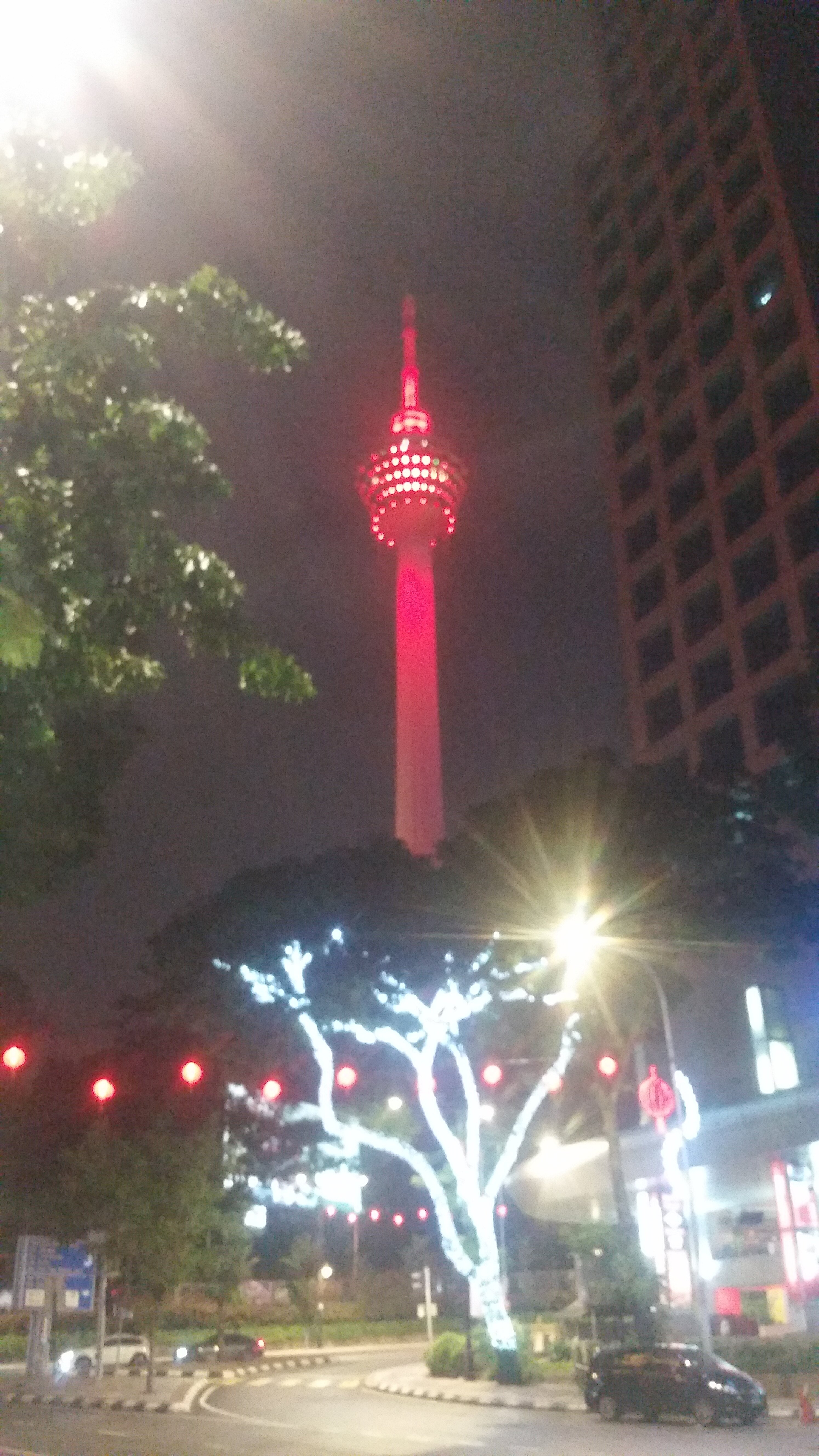 KL Tower sits on an elevated piece of land. There is a shuttle bus that takes you to the top, but we didn’t want to wait, so decided to walk up. The path snakes around as you ascend. Eventually, you reach the bottom and the tower just seems huge and strangely evil. 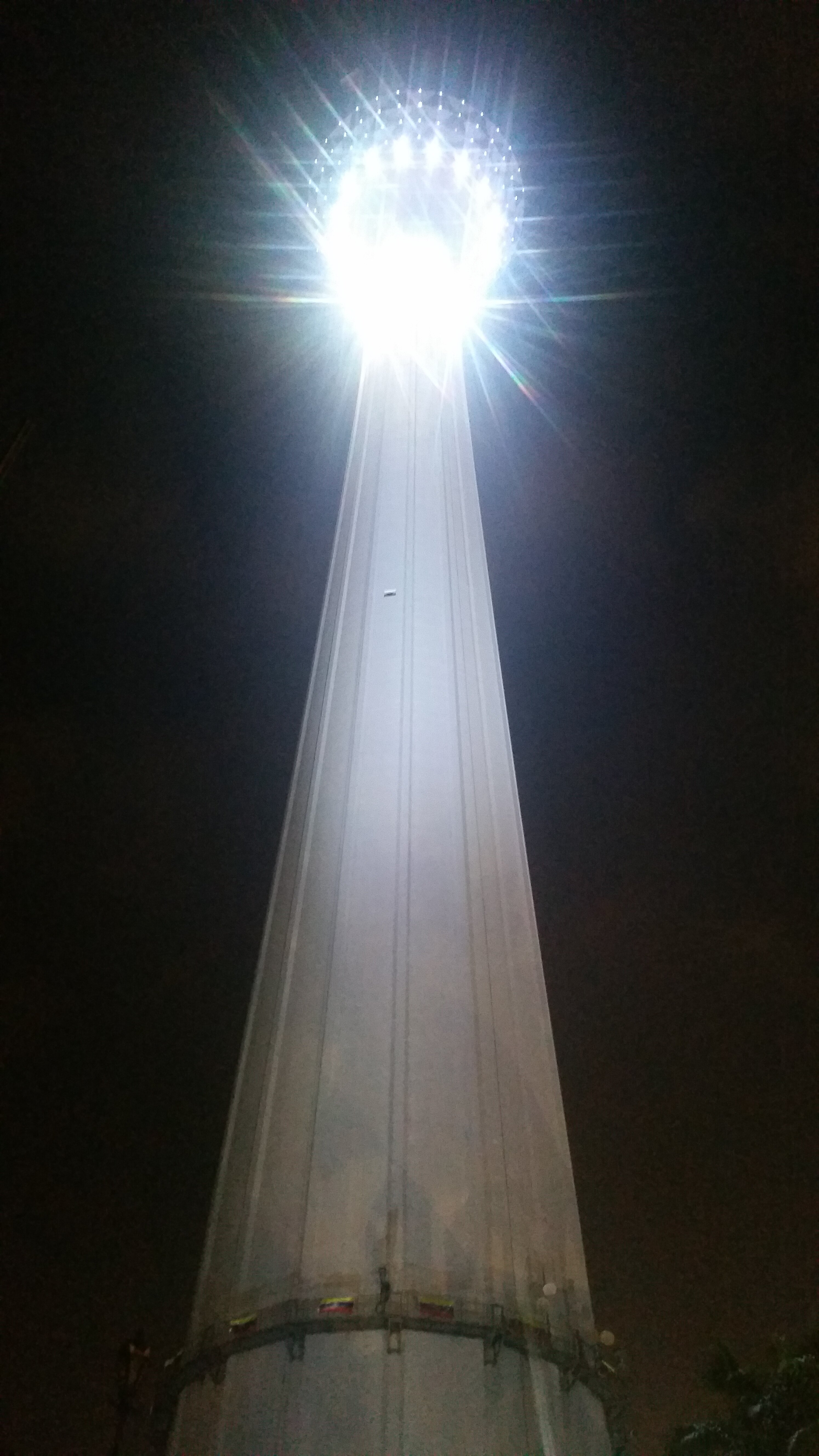 KL Tower from the bottom. Feels like being at the base of a leg of a Tripod from War of the Worlds.

Once inside, you book your ticket using an automated machine and are made to take a series of photoshoot pictures. It was kind of awkward and it’s just another way for them to try to get money from you to pay for the prints. After this, you are directed into two queues - one for people who just purchased a ticket for the (cheaper) Observation Deck, and another (the one we bought) for the Sky Deck. I’d say we were standing in a queue, but it was a queue composed of just Jurn, Daniel, and I. Everyone else was waiting to go to the Observation Deck. The elevator room has a pretty snazzy mirror-shaped sculpture in the center of the ceiling, which I really wanted to show a picture of, but my picture got corrupted. :(

Once you get to the top, the view is just breathtaking: 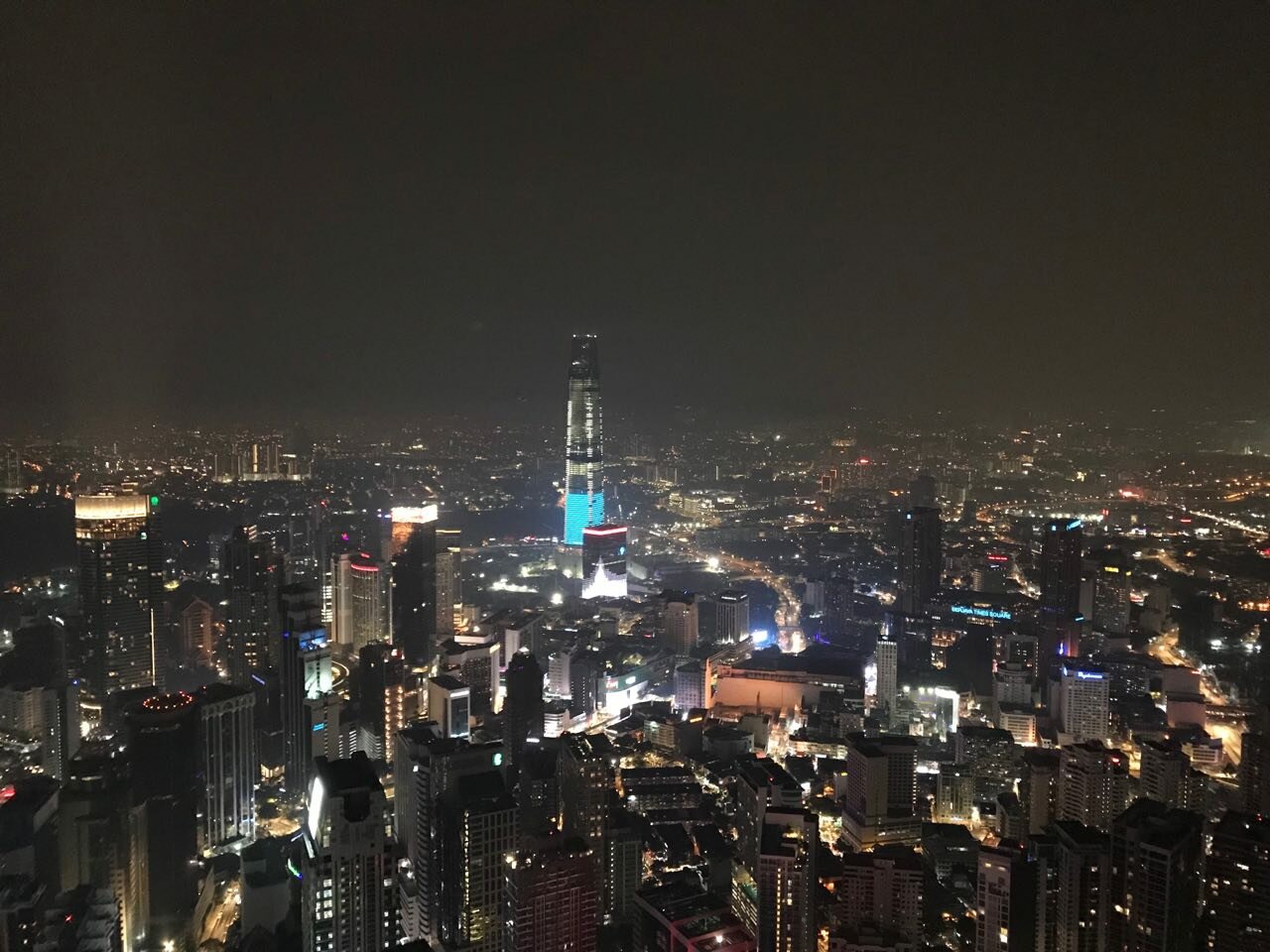 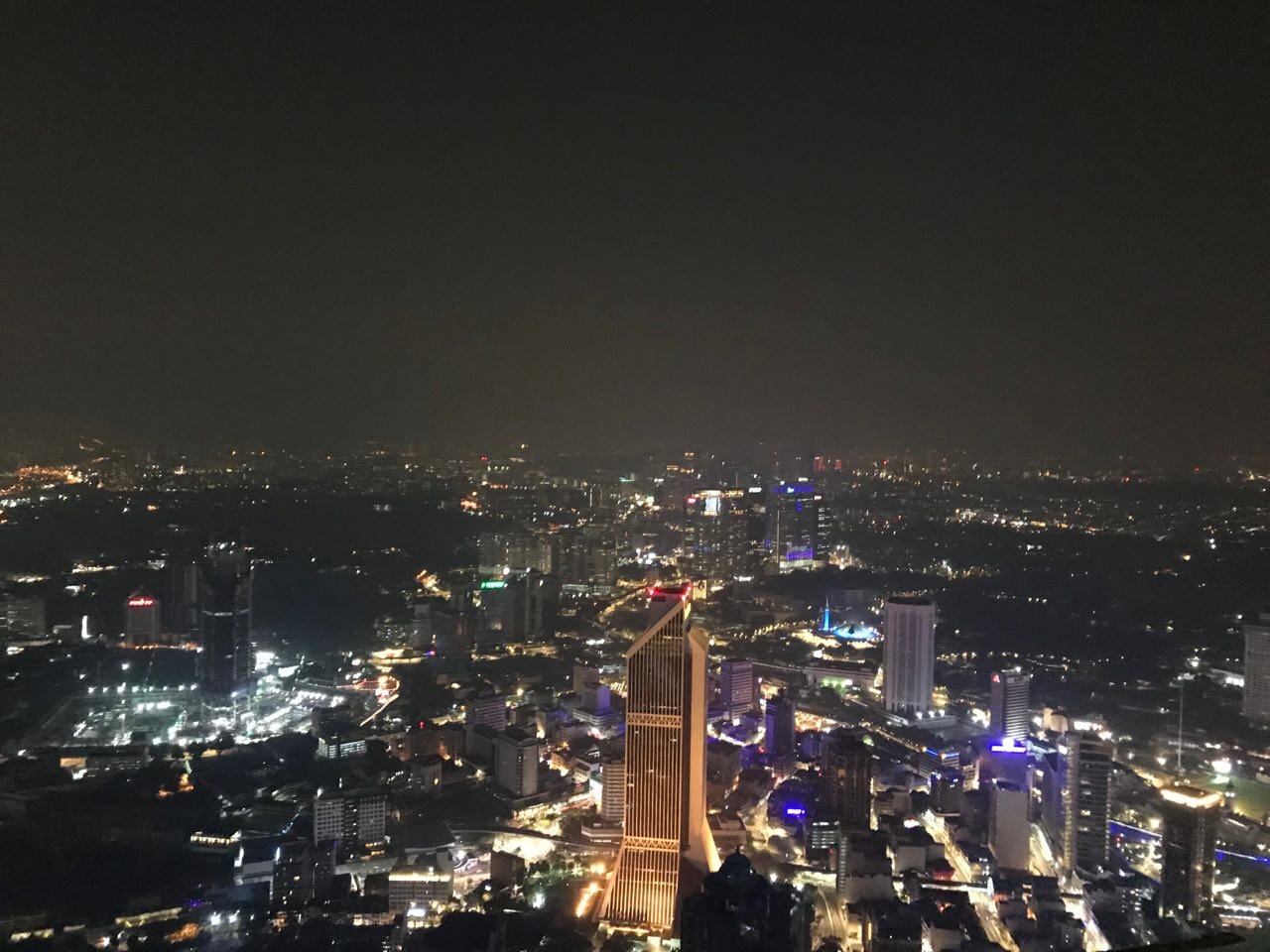 I visited Kuala Lumpur during rainy season, and it rained with thunder on some part of the city on most days. The day we went up the KL Tower was no exception, though thankfully it didn’t rain on the tower. We could see lightning crack through angry-looking clouds on the horizon. It was very beautiful and made me think of what it would be like to be floating in the eye of the red spot storm on Jupiter. 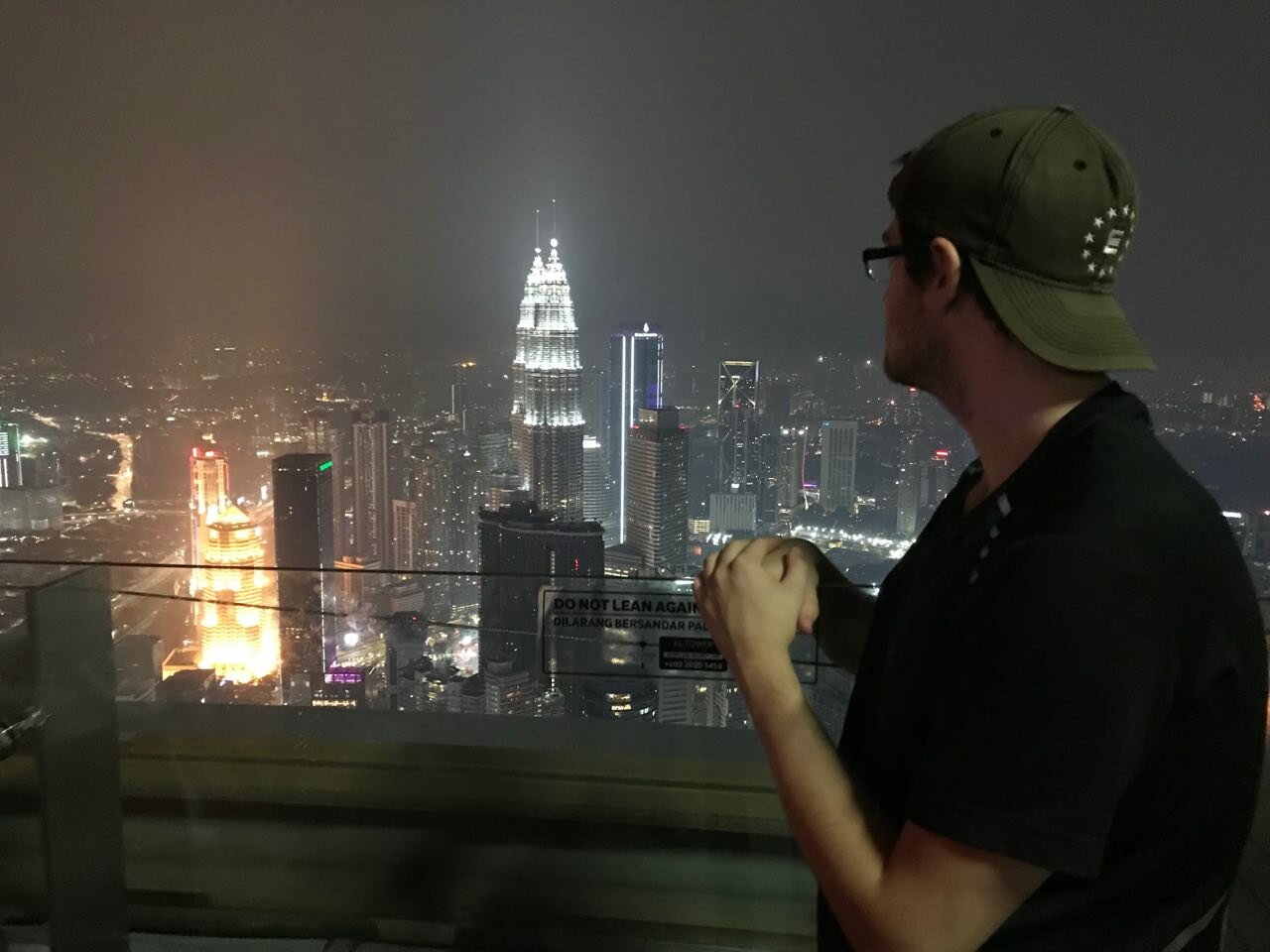 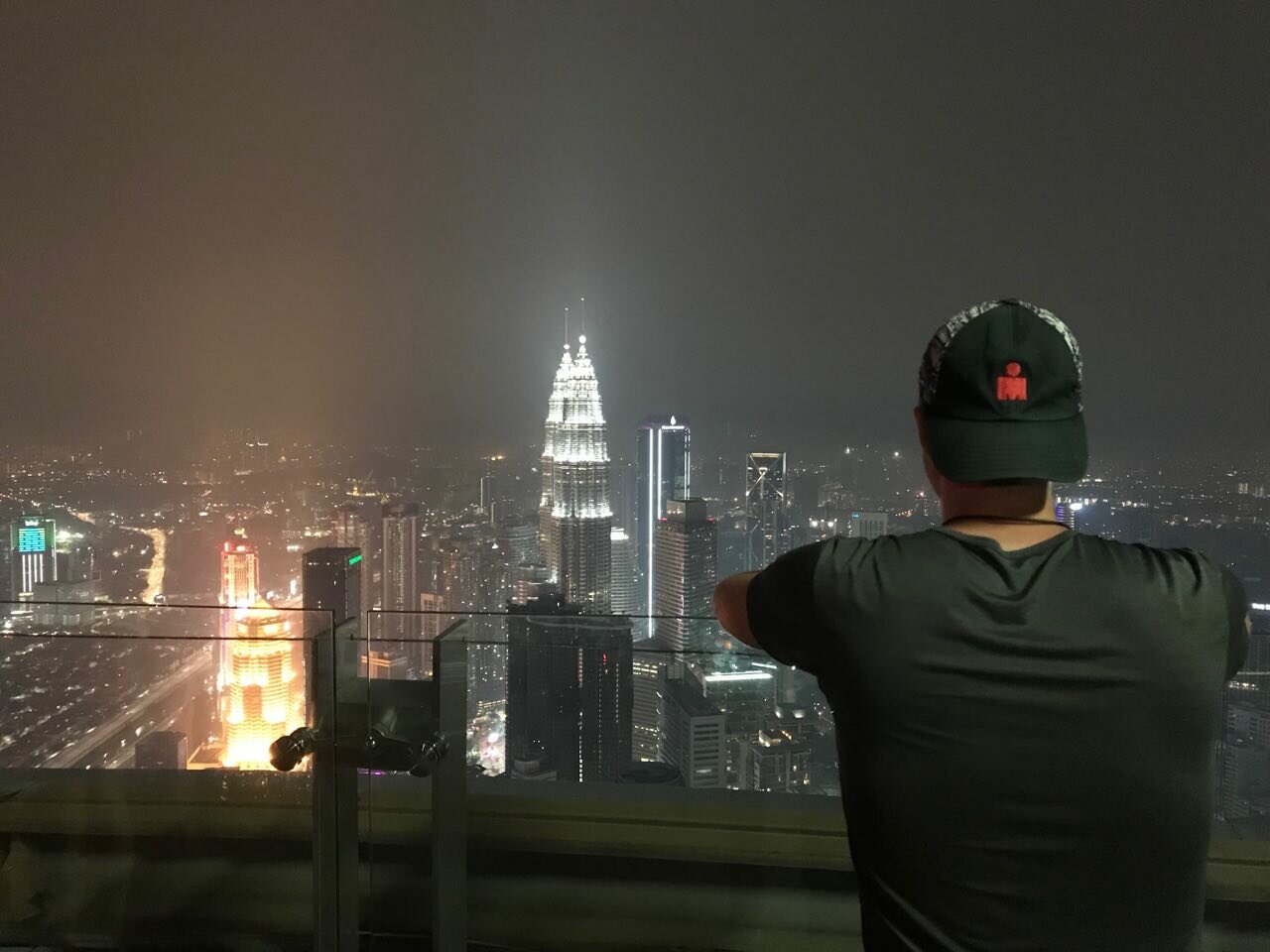 There is ‘Sky Box’ in the KL Tower Sky Deck, which is a glass box suspended from the side of the building. You have to take a ticket to get in there and wait your turn, and then you only get 1 minute and 40 seconds to enjoy it - it quickly devolves into another photoshoot. 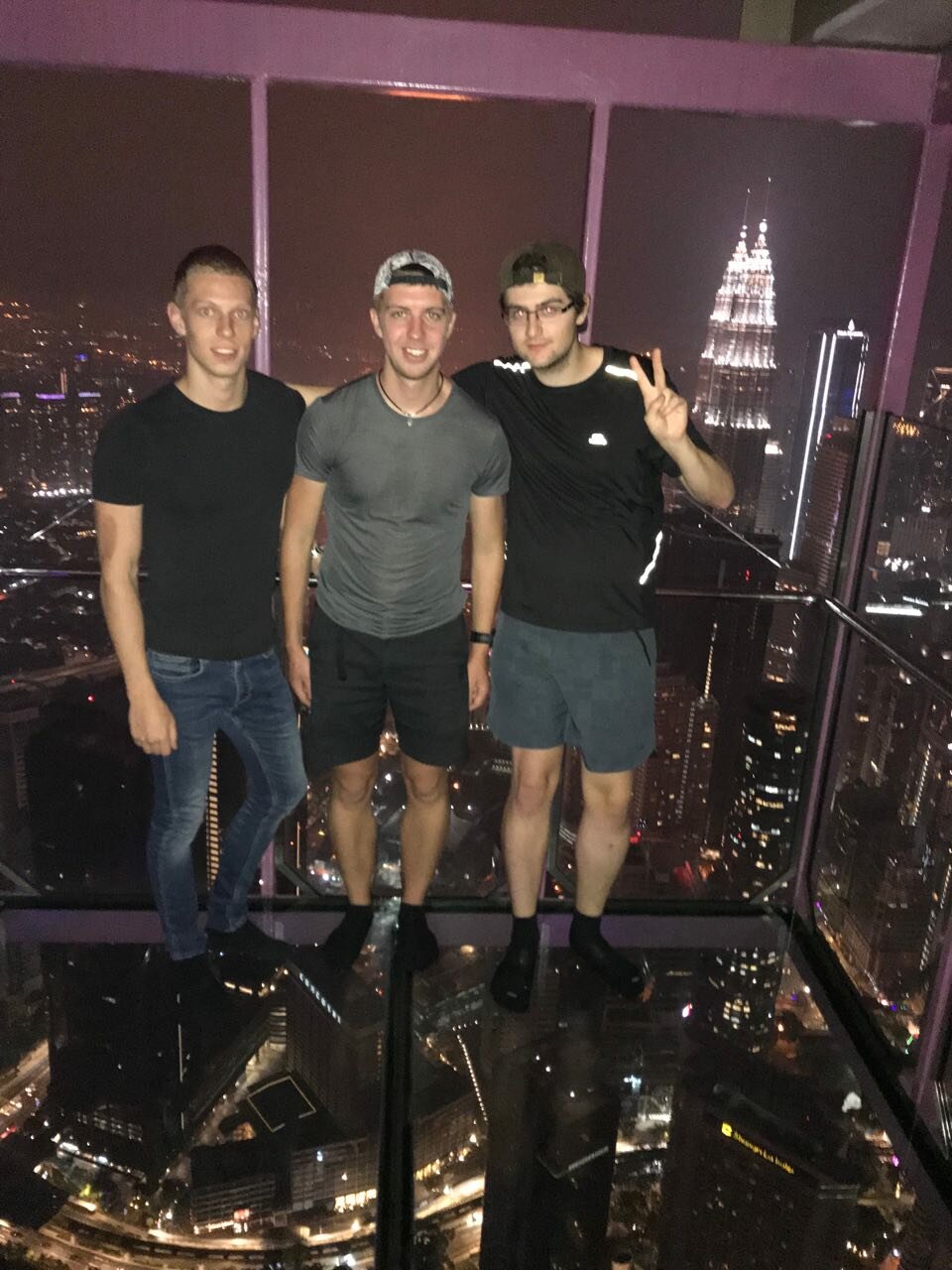 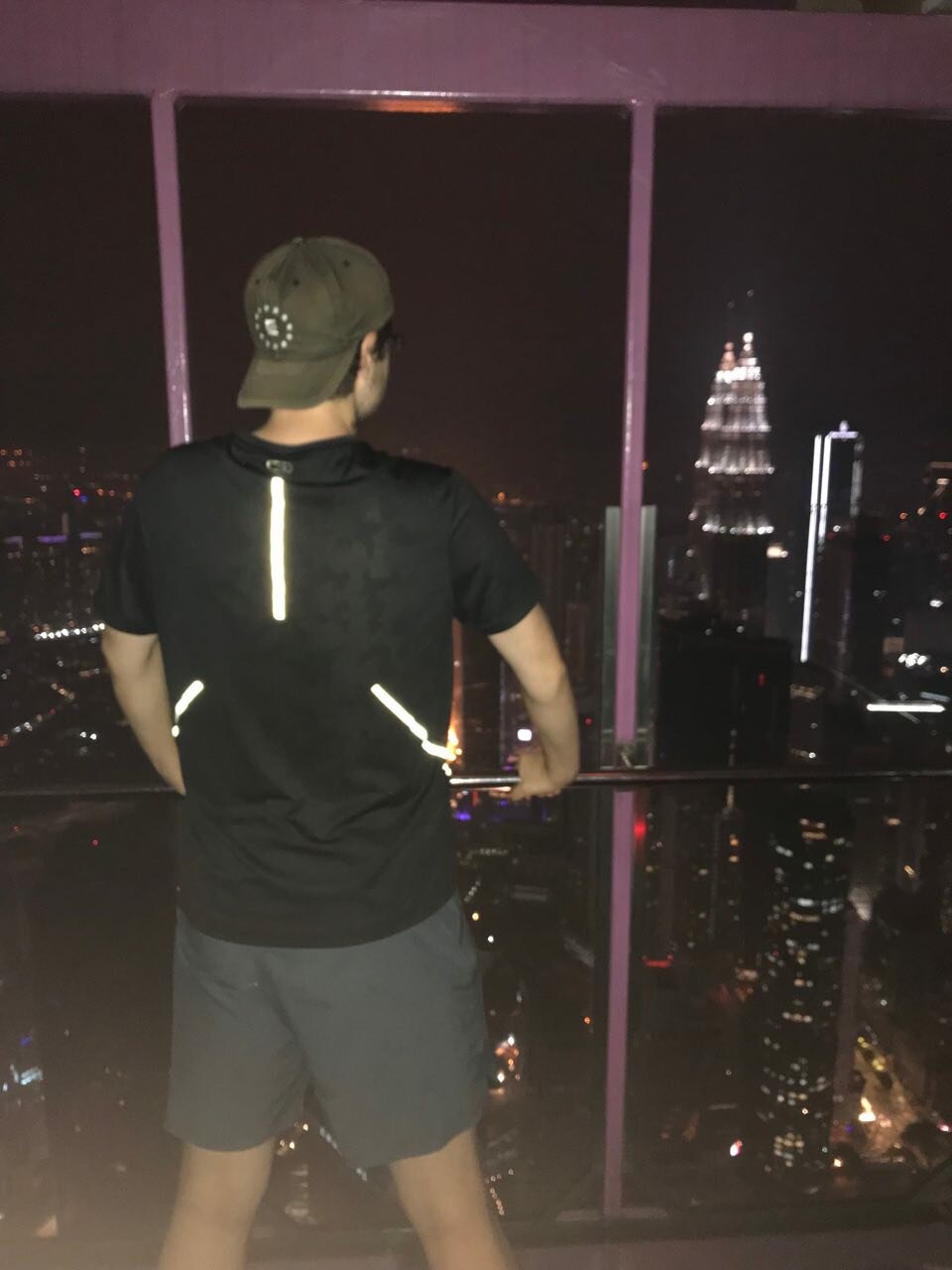 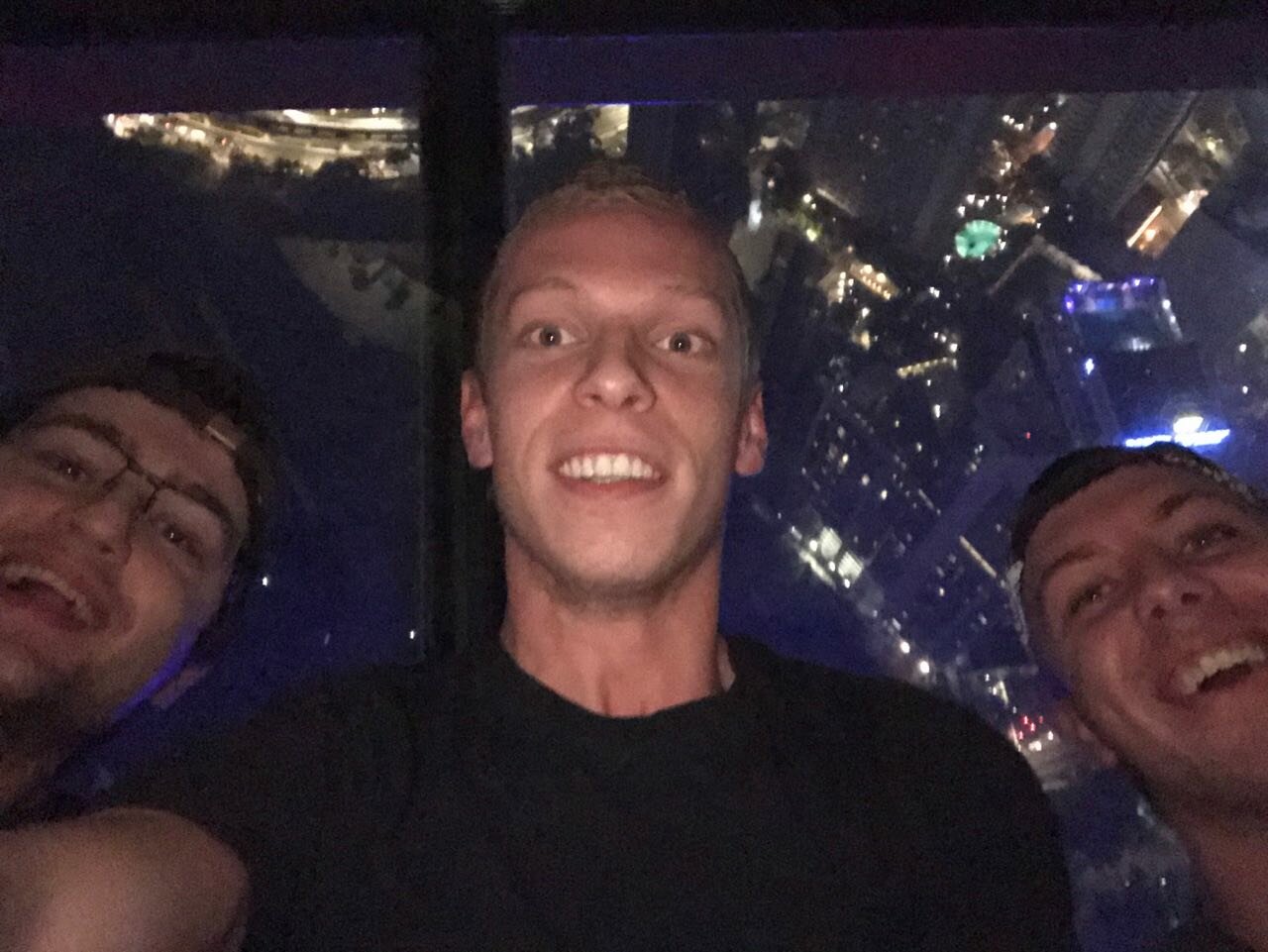 Lying on the floor. My favourite picture of the bunch.

I found the Sky Box to actually be a little underwhelming - the rest of the Sky Deck was much cooler to me, but I think the memory of quickly rushing to try and take the pictures in our allotted time slot is fairly powerful.

Thank you to Jurn for letting me use some of his photographs for this article.