Last week, I wrote a post titled “Starting Many Things”, which was a reply to my friend Pat’s post called “A Lot About A Little”.

I felt that it was an article deserving of a response, and rather respond to him directly, I thought it could be fun to lay out my ideas in one of the microblogs that I’m currently writing for this site.

Because I had spent an above-average effort on this post for a micropost, and because it wasn’t me-centric like some of my travel posts, I decided to pop it on to Hacker News, because why not? I then went to bed.

Now, usually when you submit to Hacker News, if you don’t reach traction quickly, that’s it. Your post disappears onto the second or third page and is never seen by anyone.

Sadly, that happened to this post. When I checked on it in the next morning (well, actually in the afternoon because of my messed up sleep schedule), it had just two upvotes, and I couldn’t see it on the first or second pages. Oh well. I went on with my day and forgot all about it.

The next day, when I checked my Twitter, I saw that I had a few new twitter followers. Neat. I hadn’t tweeted anything especially interesting, so I was just mildly bemused as to why. A few hours later, I got an email from someone who told me that my ‘Starting Many Things’ post had a typo in it. Oh cool, someone read my post!

It wasn’t until another half an hour later when I finally checked Hacker News that I realised I was on the front page. A first! 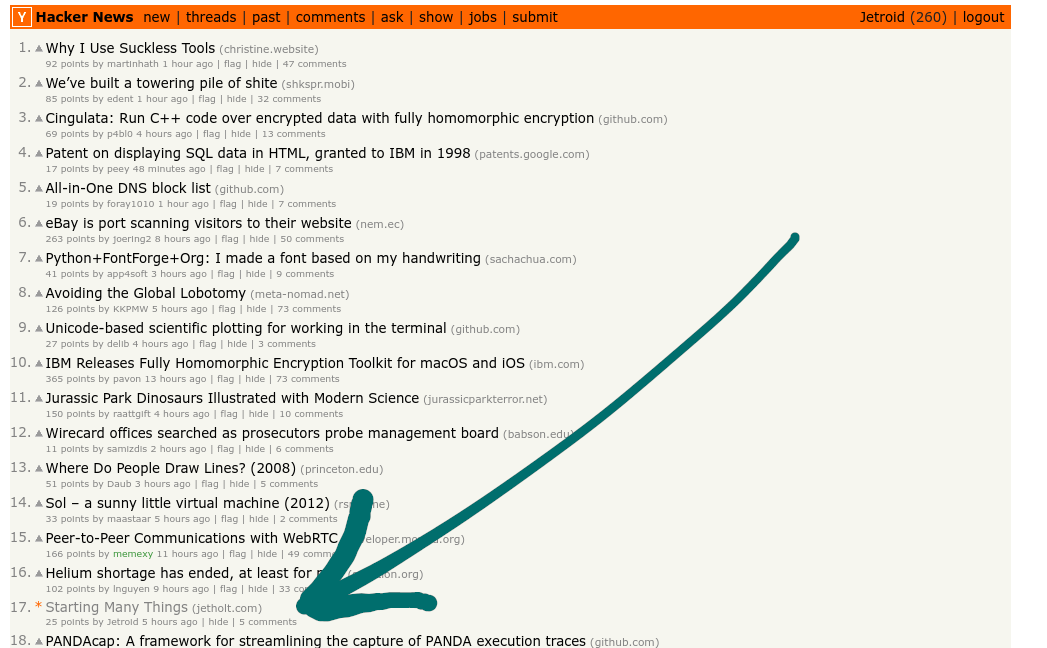 “Wow I’m on the front page of Hacker News”

If you’re confused about how I went from not seeing any traction for a whole day, to reaching the front page, then you aren’t alone. I was confused too. You might also notice that it says “5 hours ago” in that picture. No, I’m not a liar. No, I didn’t go crazy and imagine a day! There’s an explanation!

It turns out that Hacker News has a pool of users who review stories that never reached the front page. Stories that got overlooked that the community might enjoy are randomly added to the front page to give the community a second chance to take interest in it. That must be what happened to me, so my whole ‘day of excitement’ (as it ended up being) was because somebody gave me a second chance. Wow, thanks!

After figuring out what had happened, I decided to check out my analytics to see how many people were on my page right now. 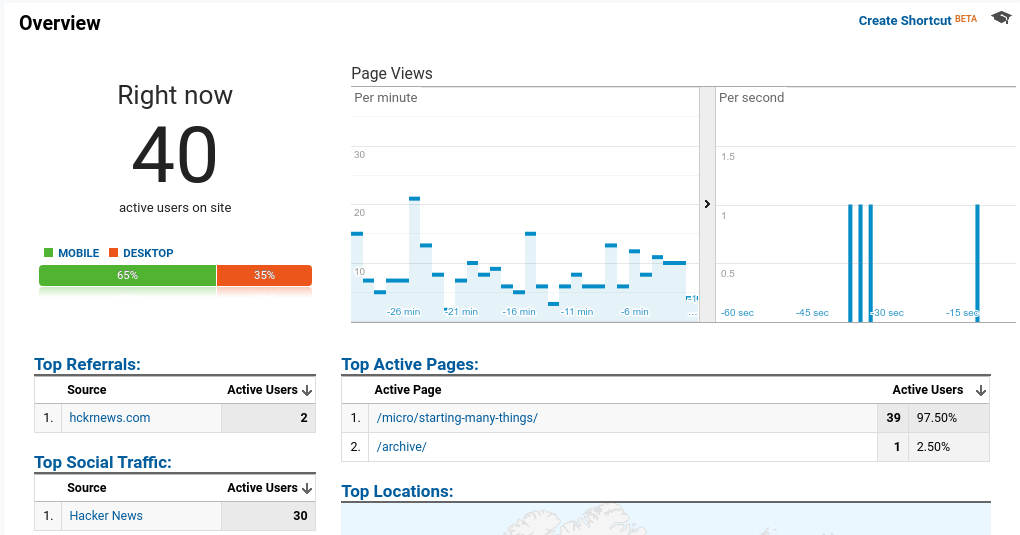 40 people were currently looking at my page when I took this screenshot. A record!

When I first looked, 40 people were looking at my website. The highest I saw this number go to was somewhere around 65 users at one time - though I didn’t look at my analytics at the time when I estimate that it was at the peak.

Having your post on the front page of something is a bit like having a bet on a racehorse. Every time it move up a position towards the top spot, you want to cheer. Every drop makes you want to cry. (I might be exaggerating on that second part…)

Periodically throughout the day, I checked on my post’s progress, then checked the corresponding analytics. When I first saw my post on the front page at 2PM, it was at #17. By 4PM it was at #14. By 6PM it had dropped to #20. As 10PM approached, it was hovering at #28, #29, #30, etc, until it dropped off to the second page at almost exactly 10PM. I don’t know if it ever got higher than #14 because I wasn’t monitoring it too closely.

It stayed on the first page of Hacker News Classic - a version of the site that only counts votes from early users - for a further two hours after it had dropped off the main page. I guess that means more early users liked my post than the general community? Not sure.

Even the next day, after my post was deep into the fourth page, I still saw that I was getting 200-300 unique visitors per hour, which is around what I’d normally see for the *whole of a regular day.

Even after the main burst of activity, my views were still higher than usual.

Here’s a graph that I pulled from Cloudflare which gives a number of unique users for the main burst. I think that Cloudflare is more accurate than JavaScript based analytics scripts (like Google Analytics) because it isn’t blocked by Ad Blockers. But unfortunately Cloudflare Analytics only shows the ‘hourly’ view for the last 24 hours.

Cloudflare showed that the main bulk of activity was 15,000 unique users.

What kind of post would this be if I didn’t have some statistics huh?

I think the really great thing about this experience was being able to read the comments. Unlike many other platforms, the majority of comments written on Hacker News are considered, thoughtful, and eloquent. They have a fair set of guidelines that are strictly enforced. The community is well aware of them and tend to flag/downvote any comment that is in violation.

The top comment and its replies are great. They mesh with the take-away of my original post, too. Everything is a learning experience. Everything we do (hopefully) helps us to grow into a better, more unique person.

I also really appreciated aazaa’s comment, which highlighted that by microposting, I was doing much more ‘exploration’ of ideas than if I was sticking to my ‘a few posts every few months’ strategy. In doing so, I was able to find something that I really wanted to write about and write about it in detail, ending up with my ‘Starting Many Things’ post.

As another take away is that I’m very greatful that I added a call to action at the bottom of my articles. When I first added it, it felt a little tacky. Currently, I have a link to my twitter account; because of that, I near enough doubled my current twitter followers overnight.

Read Pat’s original post, ‘A Lot About A Little’ here.

You can read the full discussion on Hacker News here.

Pat wrote a follow-up to both his and my post, ‘Virtuoso’, which is also very interesting.