A year ago today, I climbed Mt Abang in Bali. Seven months later, I climbed Mt Batur. I didn’t write about either adventure at the time, so I have to write it now to share the story of the trip. Enjoy!

It was a lot of fun to ride across the landscape of Bali in the dark. We had left home at 2:30AM n the 8th June 2019, and I was incredibly excited.

The roads were empty and the air was refreshingly cool. After being in Asia for 6 months, it was nice to be outdoors and not feel hot and sticky.

It was incredibly quiet and peaceful on the journey. We were mostly alone and didn’t see any other people, though occasionally we’d pass through a village and see villagers selling things at a market - at 4AM! Life just starts earlier in Bali. 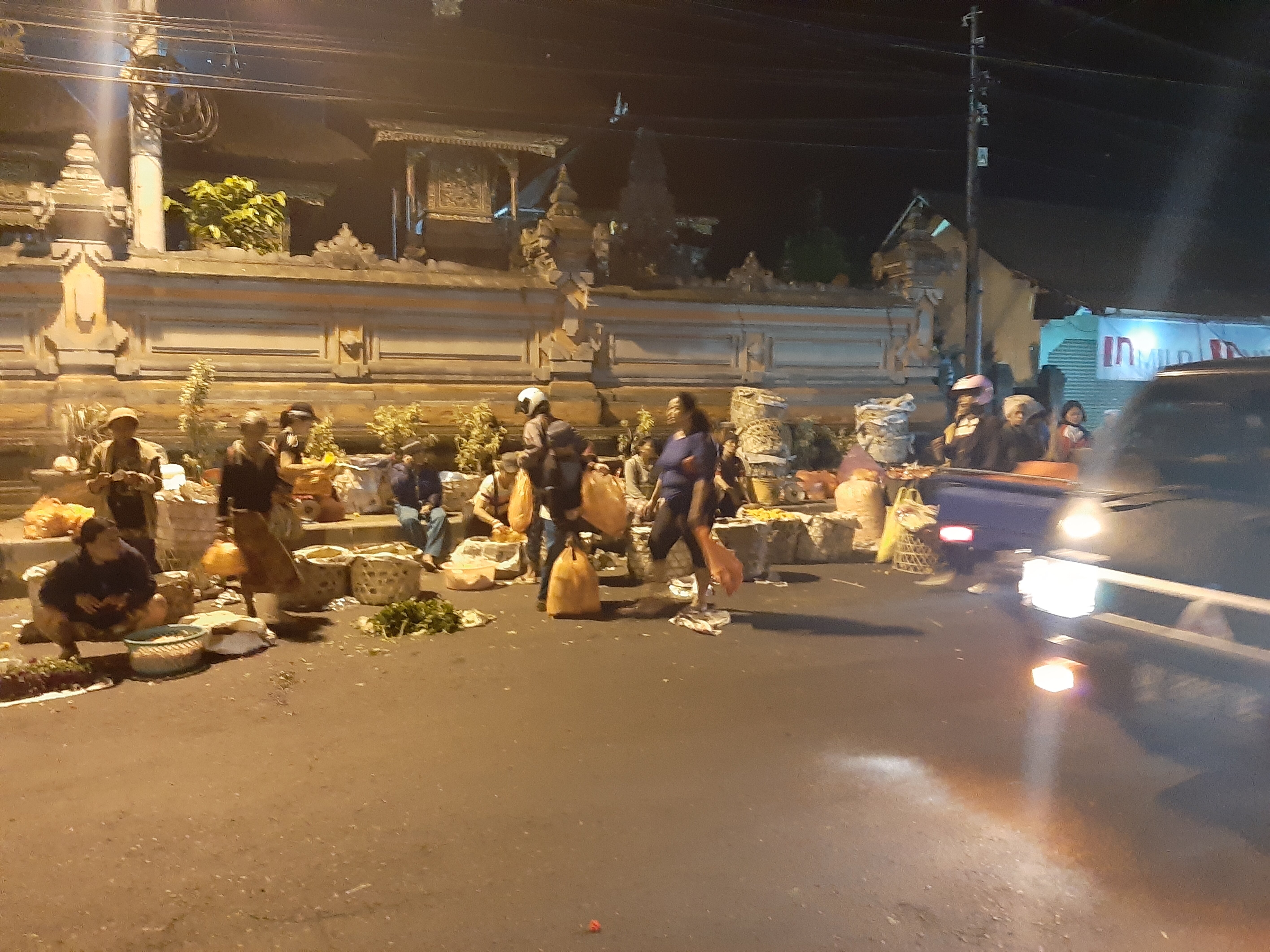 Villagers attending a market at 4AM.

We met up with the rest of the group just after 5:30AM. That seemed appropriate, given that we would be climbing the mountain with the lensa_5.30 running club.

The Museum Geopark building loomed in the fog and felt pretty ominous to me. We stopped there and posed for photos as a group.

Museum Geopark looming in the fog. 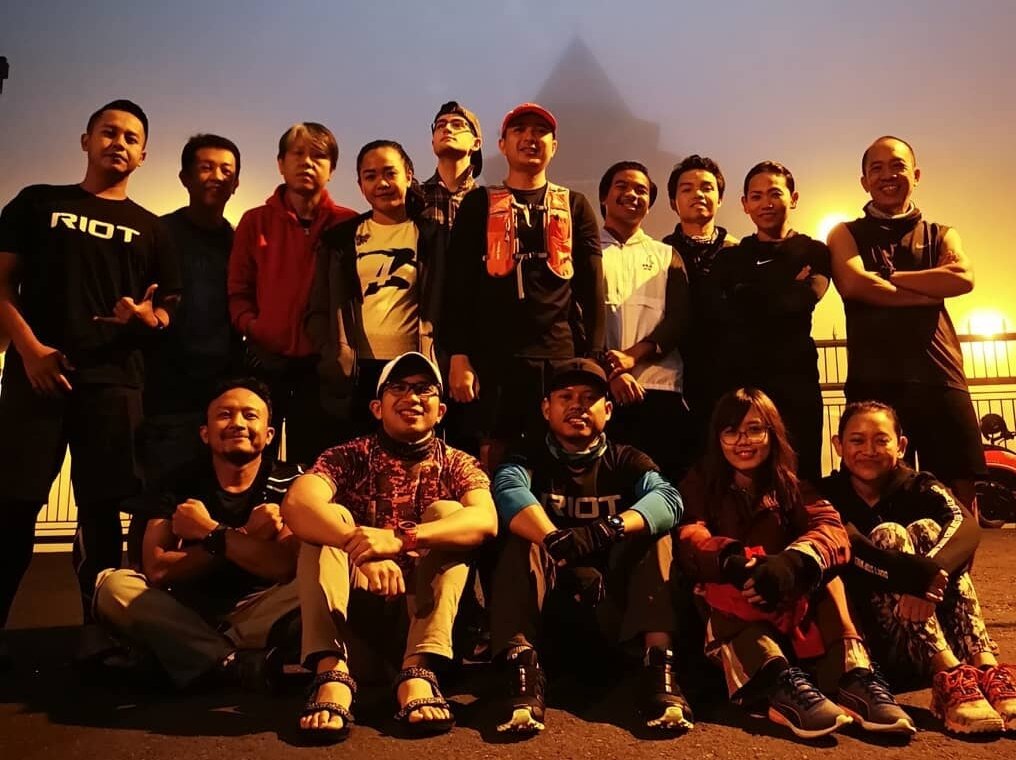 The chill of the cold air at the base of the mountain was fun, too. The temperature was around 14-16 Celsius, and my companions were complaining about how cold it was whilst shivering. I remarked that the UK was at that temperature or below for two thirds of the year. They stared in disbelief.

We drove a little further to a wooded area where you can park and then enter directly on to the trail.

We stopped at two different temple spots as we ascended. I say temples because that’s what my Balinese comrades referred to it as, but I would probably have called them ‘shrines’. Everyone made offerings before we continued to climb. 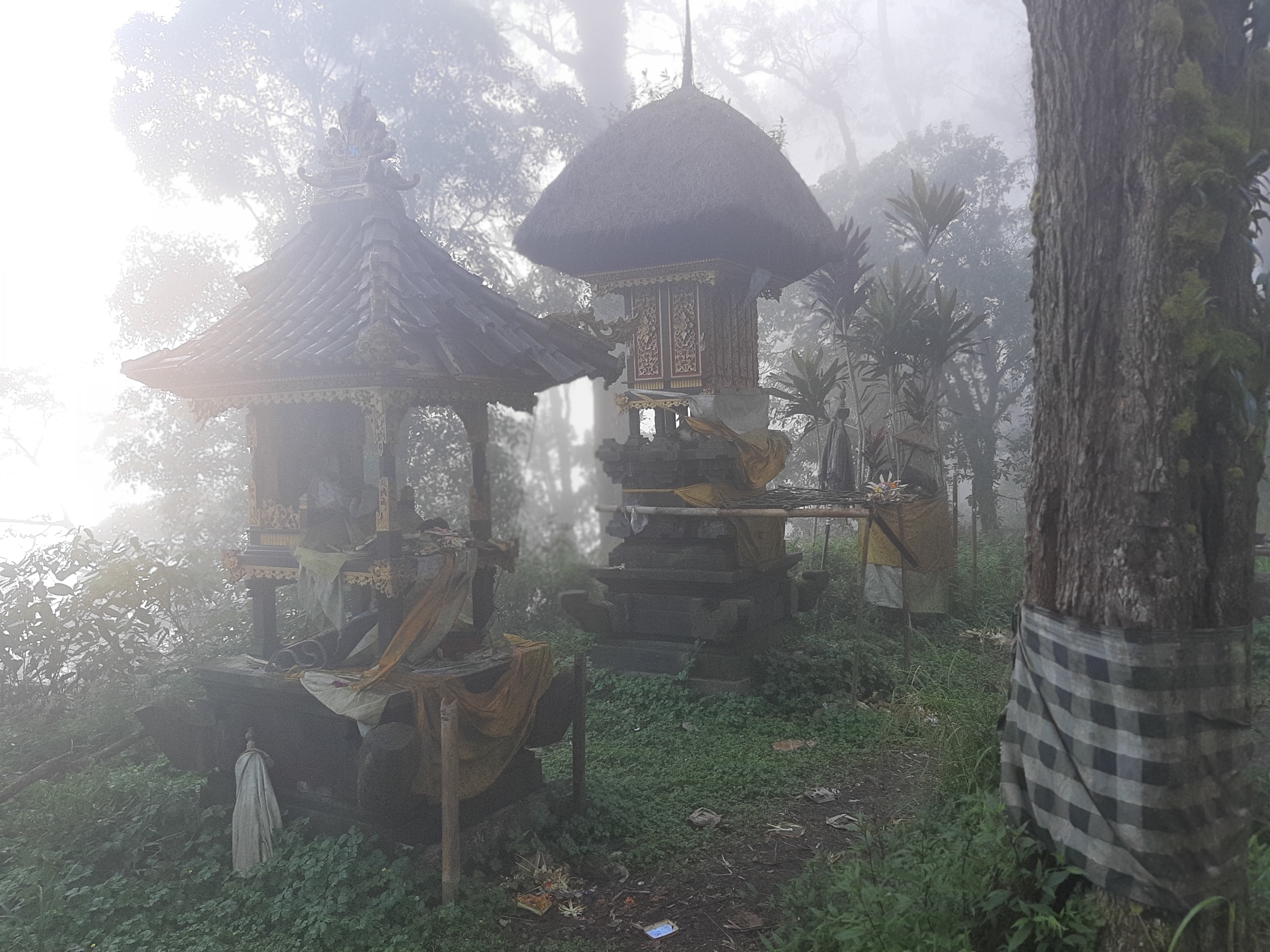 One of the temple shrines that we stopped at.

As you have already seen, it was very misty on that morning, so despite reaching many clearings that could have provided astonishing views, we didn’t see much on the ascent. 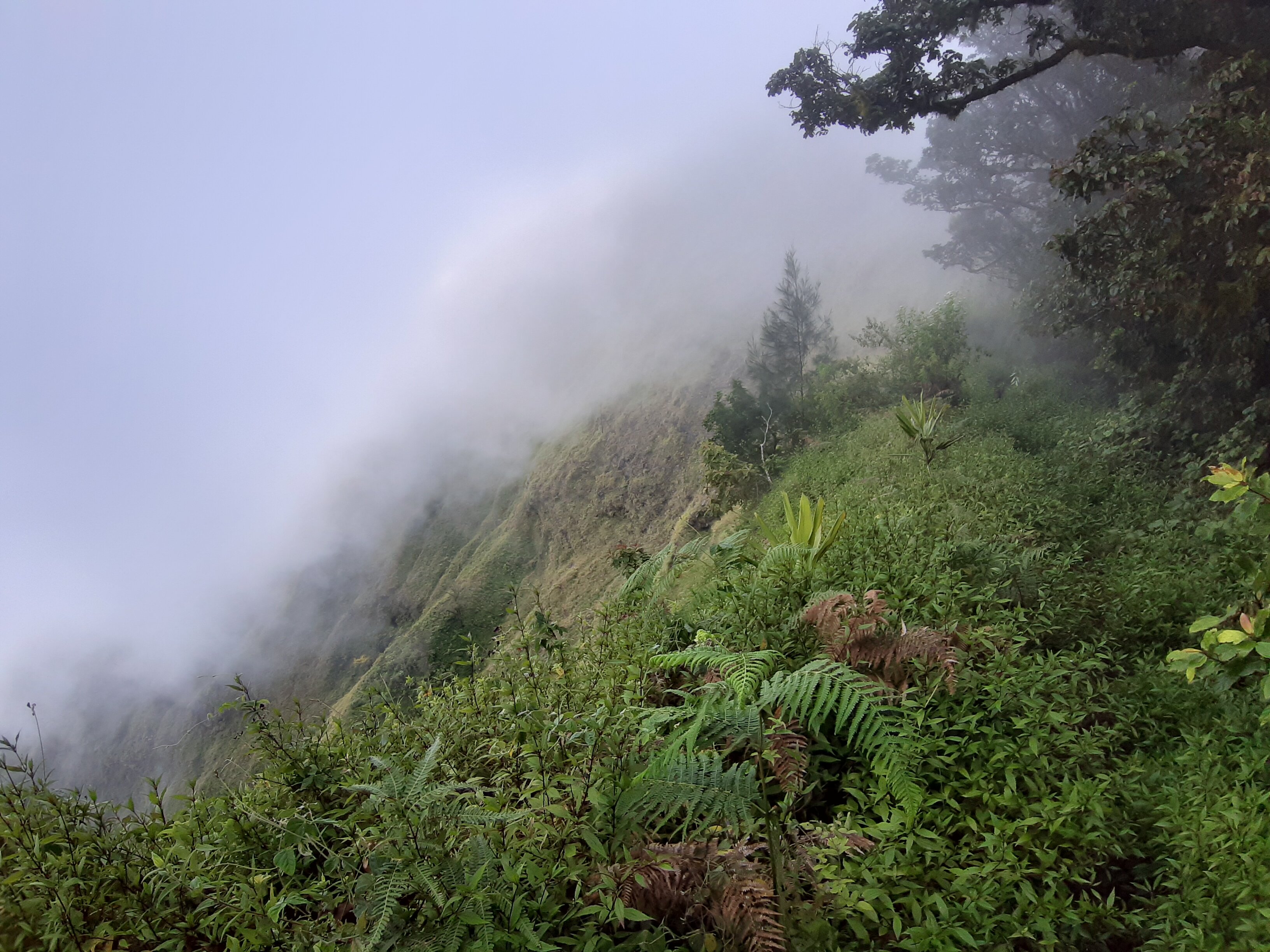 The misty and cloudy view from the mountainside.

Instead, I enjoyed looking at the flora. The foliage was really interesting. It didn’t exactly feel like the kind of stuff I’d seen in the rest of the jungles on Bali, but more like a mix between what I might find at home with some distinctly tropical plants mixed in too. I’m sure the climate contributed to that. 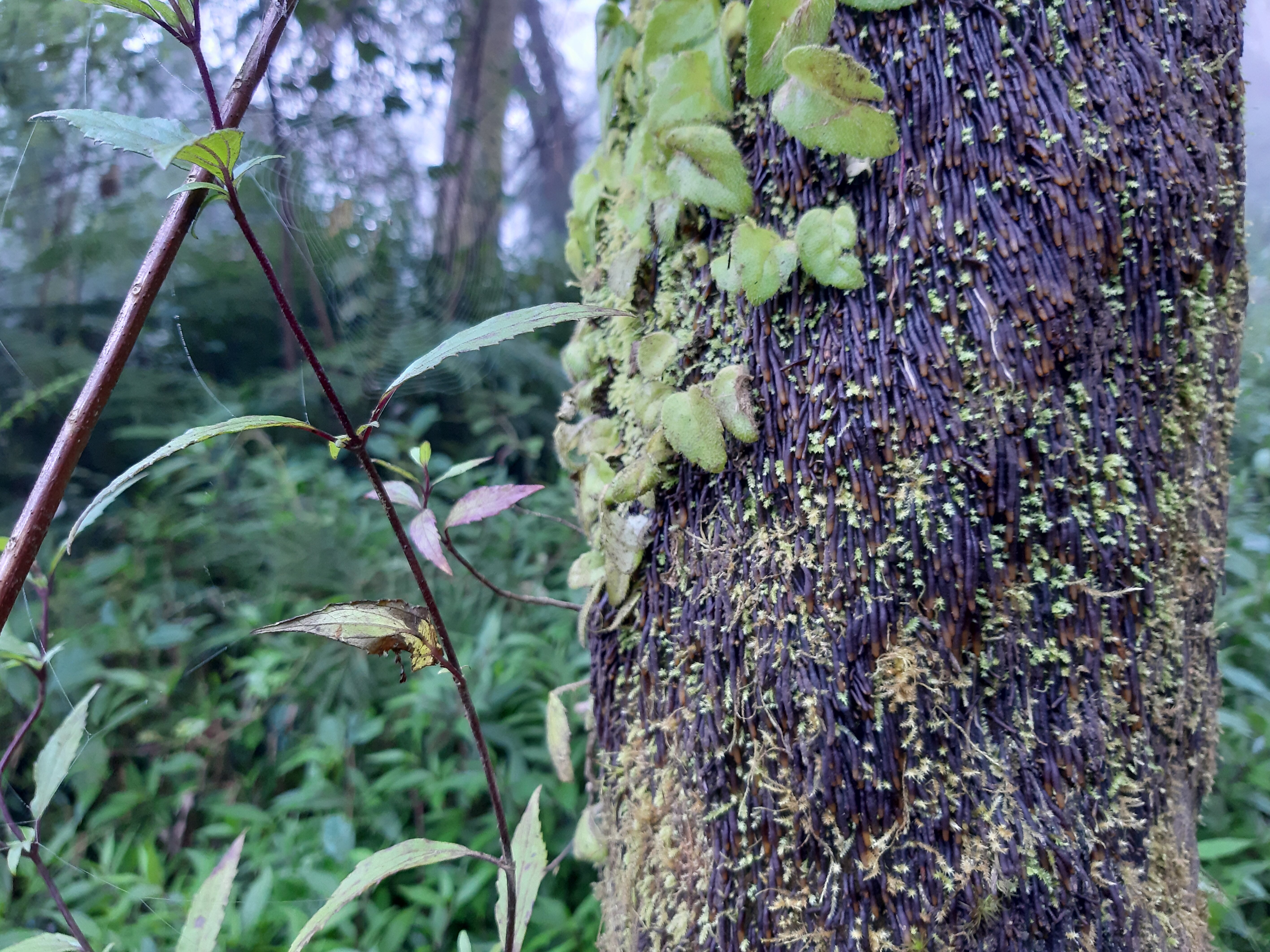 Lichen growing on a tree, cobwebs, greenery. This photo has it all.

The trees were tall and imposing.

It wasn’t raining, but the mist and humidity made our hair and clothes damp.

Eventually we reached the summit of the mountain, 2151m above sea level. It was still incredibly cloudy, so we couldn’t really see much, which was a shame. Occasionally we got a glimpse of the land below.

During our climb, I had trouble getting purchase on the damp mud and slippery soil a few times. This wasn’t too bad on the climb up, but on the way down, I slipped repeatedly. It was really embarrassing for me and I felt like I was letting down my culture and representing the west in a bad way. In truth, it was because my trainers were worn down and flat from the hundreds of kilometres of running that I had done in the sixth months since I had bought my shoes. But nobody believed that excuse. 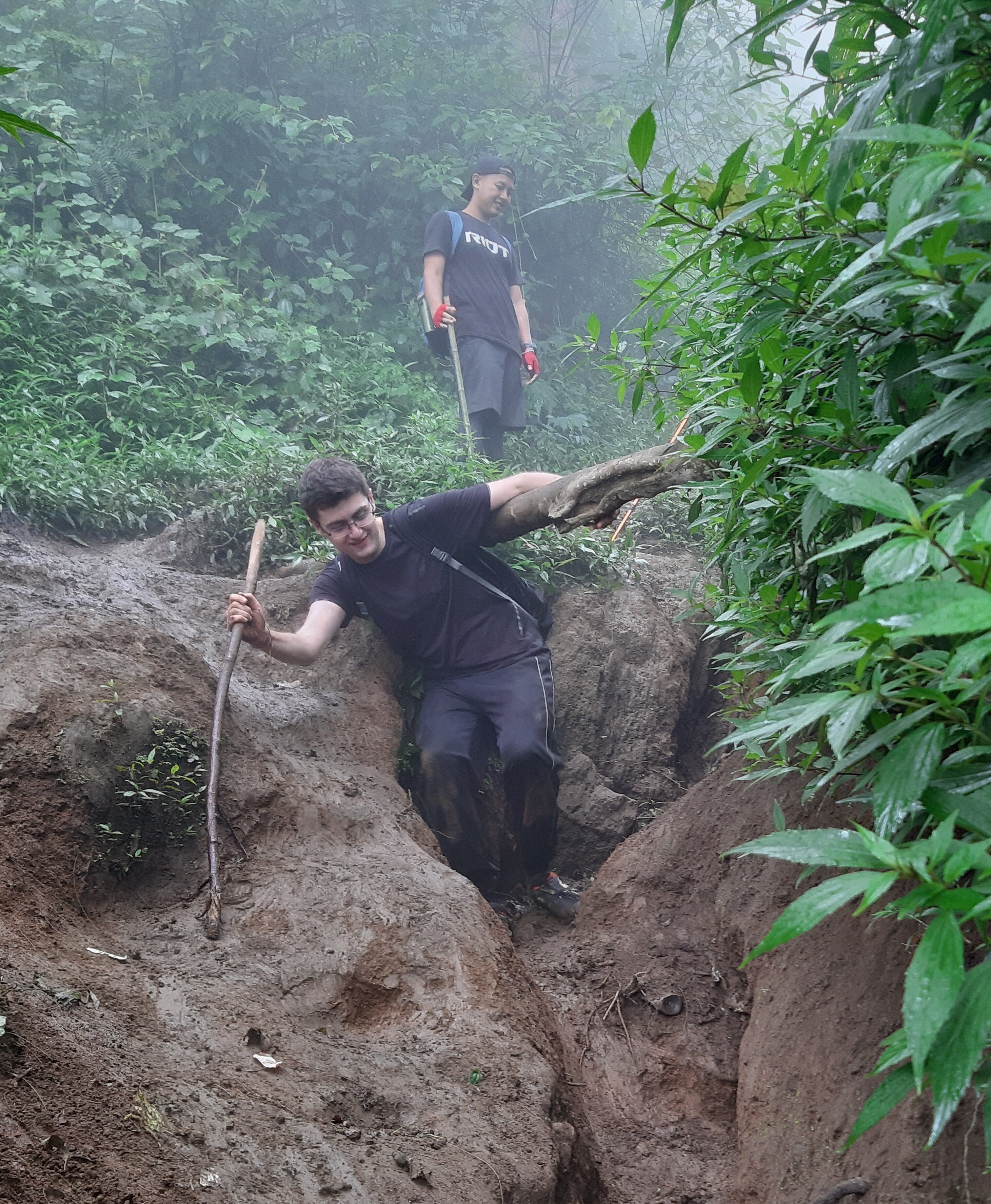 Struggling to make my way down an incline.

Whilst descending, the mist and clouds cleared somewhat, so we could see the view. There were only a few clear spots because of the dense foliage, but every time there was a view, we stopped. It was breathtaking. 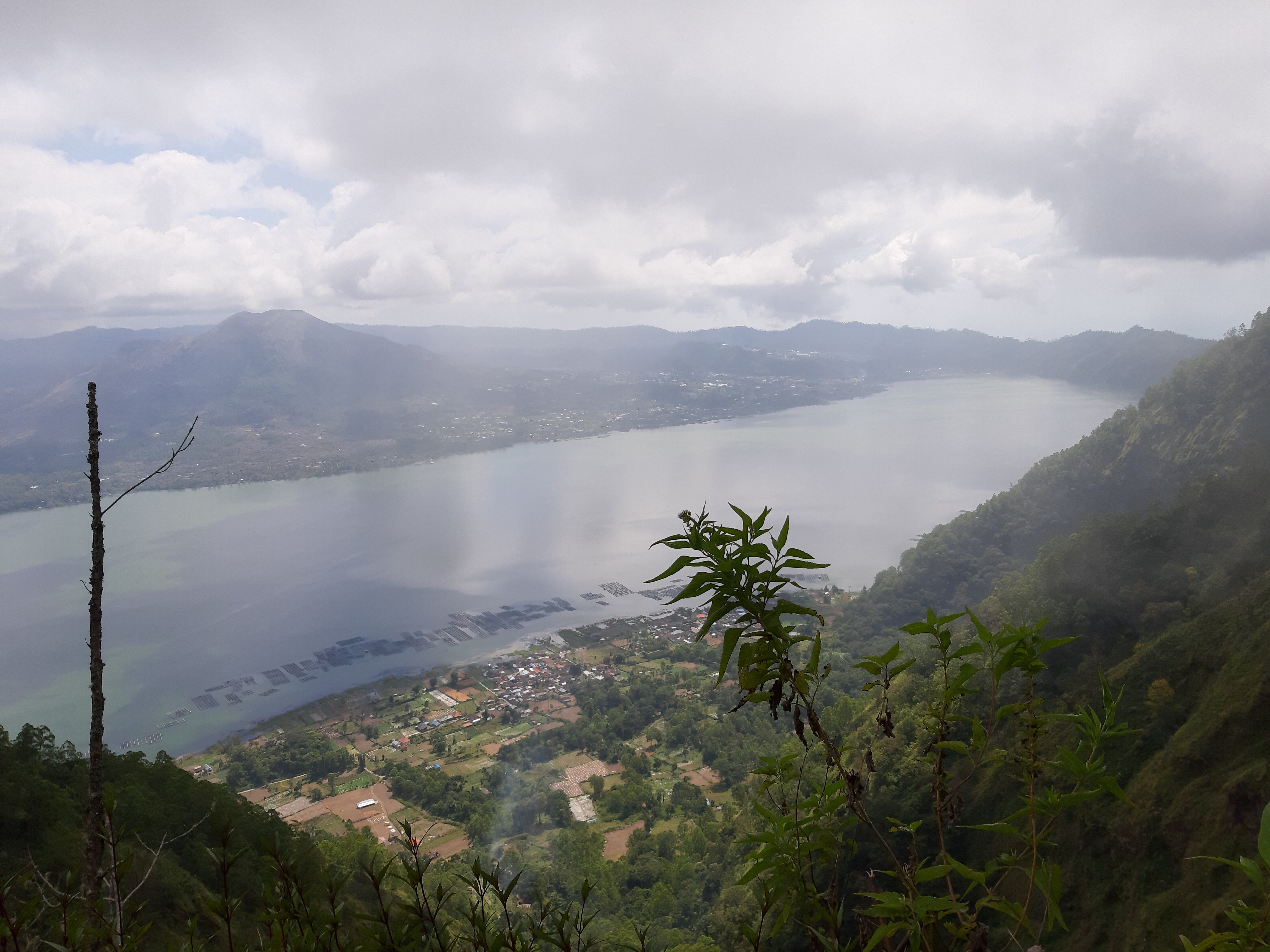 The view from the mountainside.

We could also see Mount Batur, the neighbouring mountain. You can see it on the far side of the lake, above.

“Let’s go there next time I come to Bali”, I told Ni. She agreed.

My friend Aiden had recommended that I climb Batur when I had first arrived in Bali. He had told me that the sunrise from Batur was beautiful.

The next opportunity to climb a mountain was when I returned to Bali for two months in December 2019. We didn’t want to climb too close to Christmas or New Year because it would be crowded, (actually, I really, really wanted to climb on New Years Day, but Ni wouldn’t let me.), so we waited until the 19th January 2020. Again, we got up at 2AM to travel the 40km to Batur. Again, we reached the base of the mountain around 5AM and met up with the rest of the group at the Geopark Museum.

As we arrived at the base of the mountain proper, a group of guys accosted us and demanded we pay up to climb the mountain.

I didn’t even believe those guys were official, and didn’t want to pay. I’ve heard about scammers trying to get money from people to visit Besakih temple, and I was almost certain this was the same thing. There were no uniforms to be seen. I definitely wouldn’t have paid because I didn’t believe it, but Koko, the group leader, haggled them down to Rp300,000 and agreed to split the cost across the group. It ruined our mood, but fine. I paid Koko Rp80,000.

As we neared the mountain, we could see a trail of lights blinking all over the side of the mountain. Imagine a vein of light going up the mountain. I initially thought that the trail was lit, but quickly realised that it was the smartphone torches of the other visitors who were all following the same path.

Batur was much less jungle-y and much more rocky than Abang. It just had grasses and a few bushes here and there, rather than big trees everywhere. That made it much better for the views. As we began to climb, the sun began to rise and we captured the most beautiful photos. 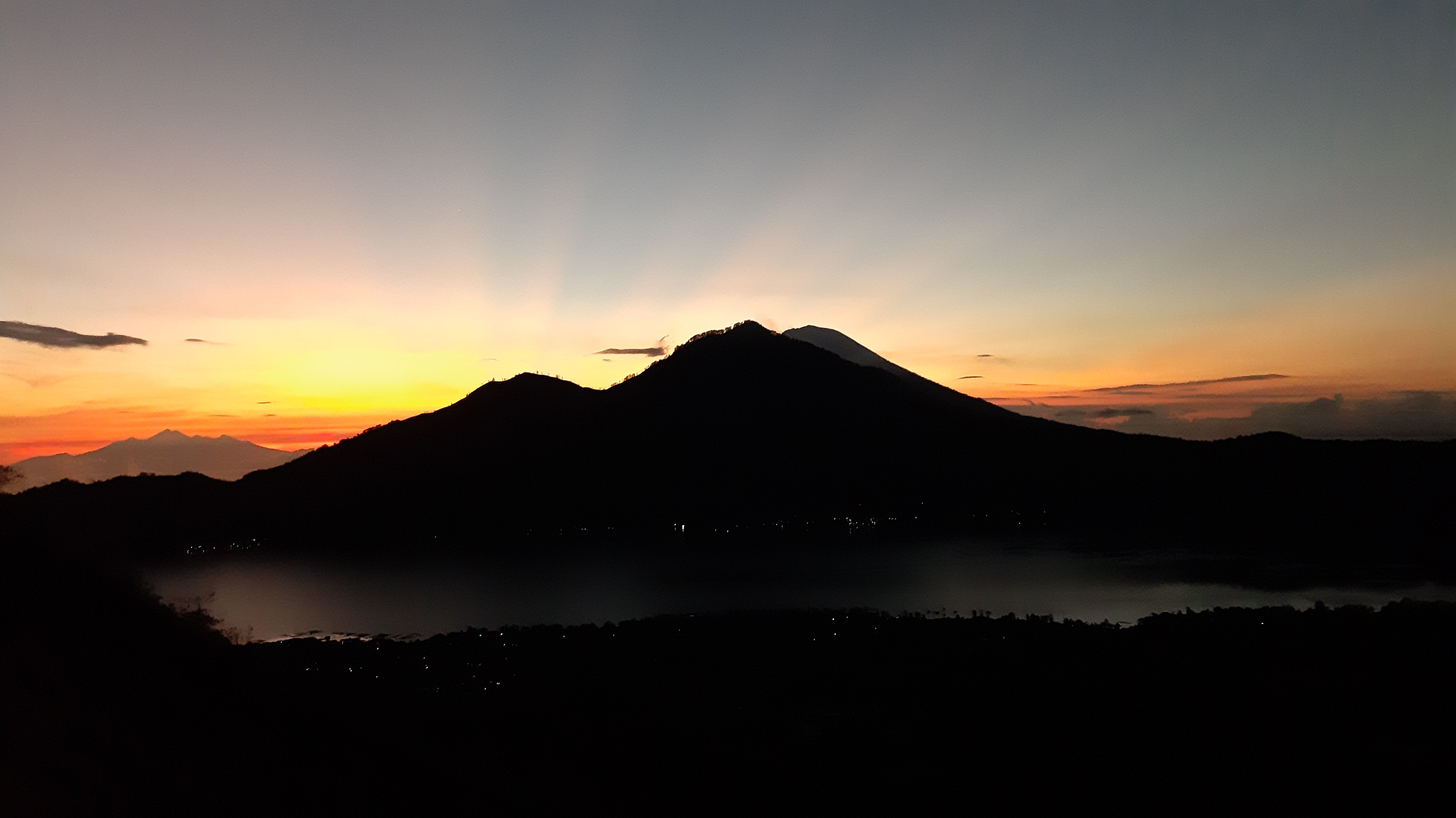 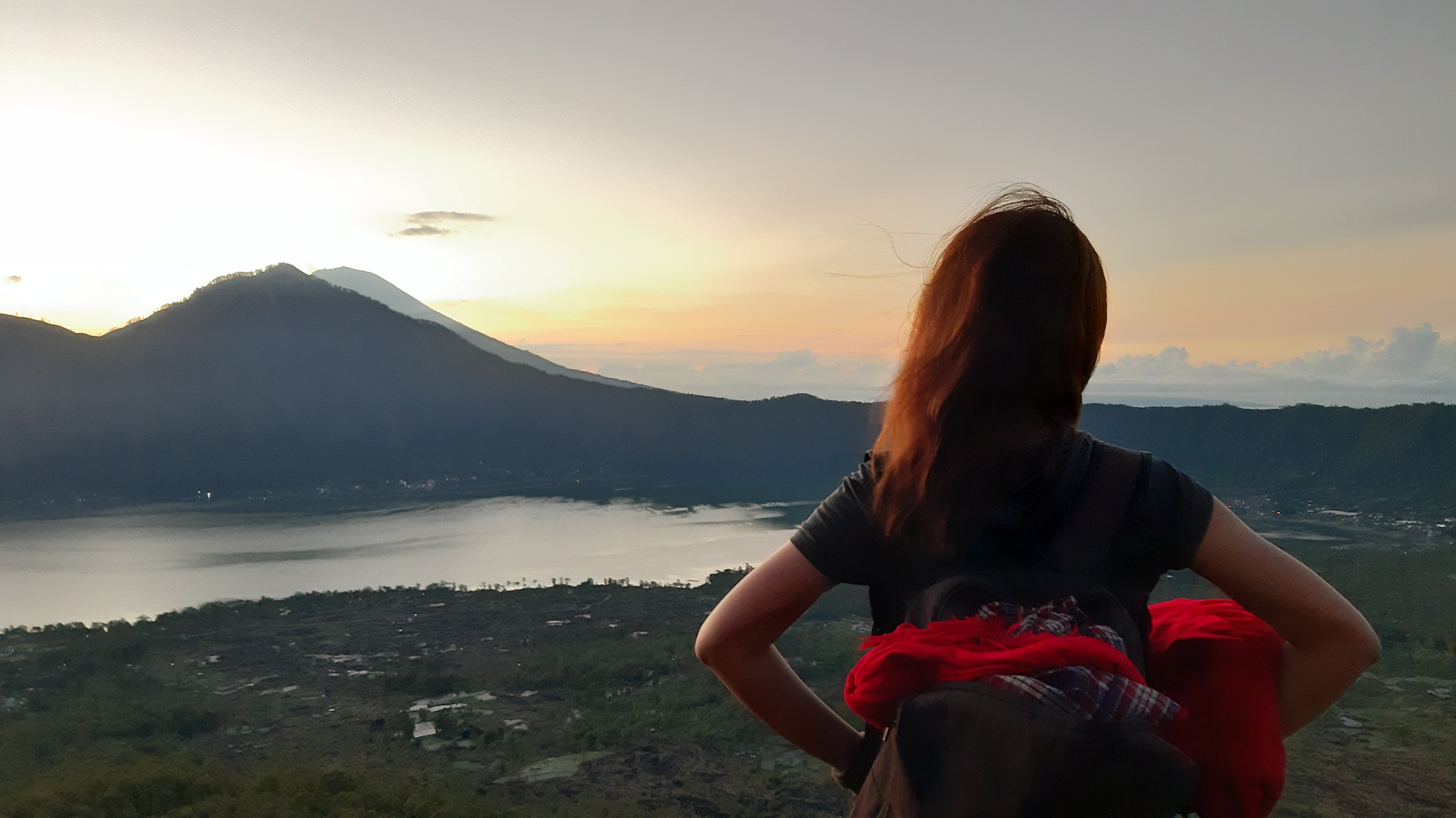 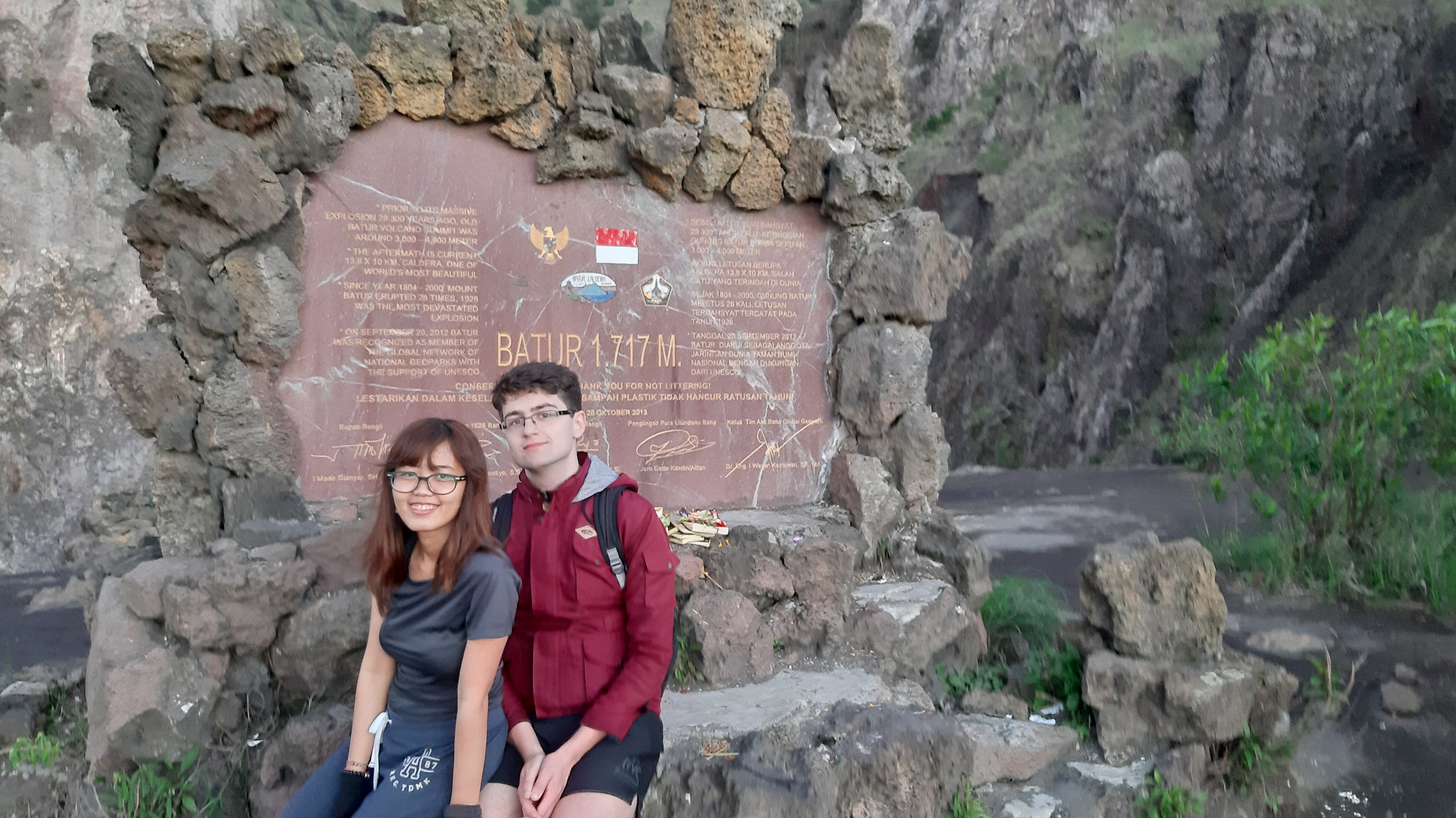 Surprisingly, this fancy monument was not at the summit of Batur.

The climb was fairly easy. When we reached the top, monkeys appeared out of nowhere and stole a banana from Ni. They liked to sit on a tin roof of a small coffee shack, staying alert for vulnerable tourists eating and drinking food that they could steal. 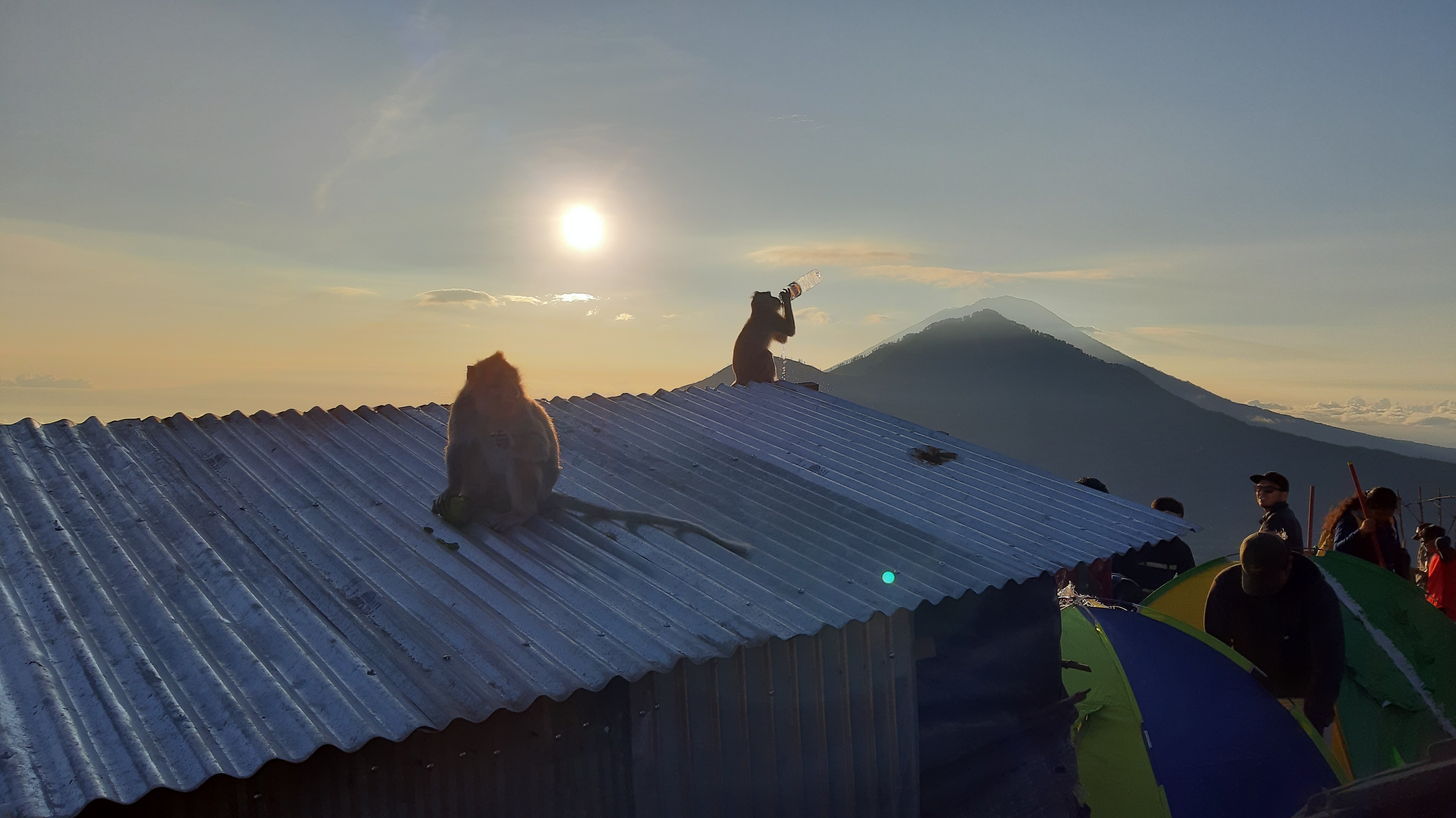 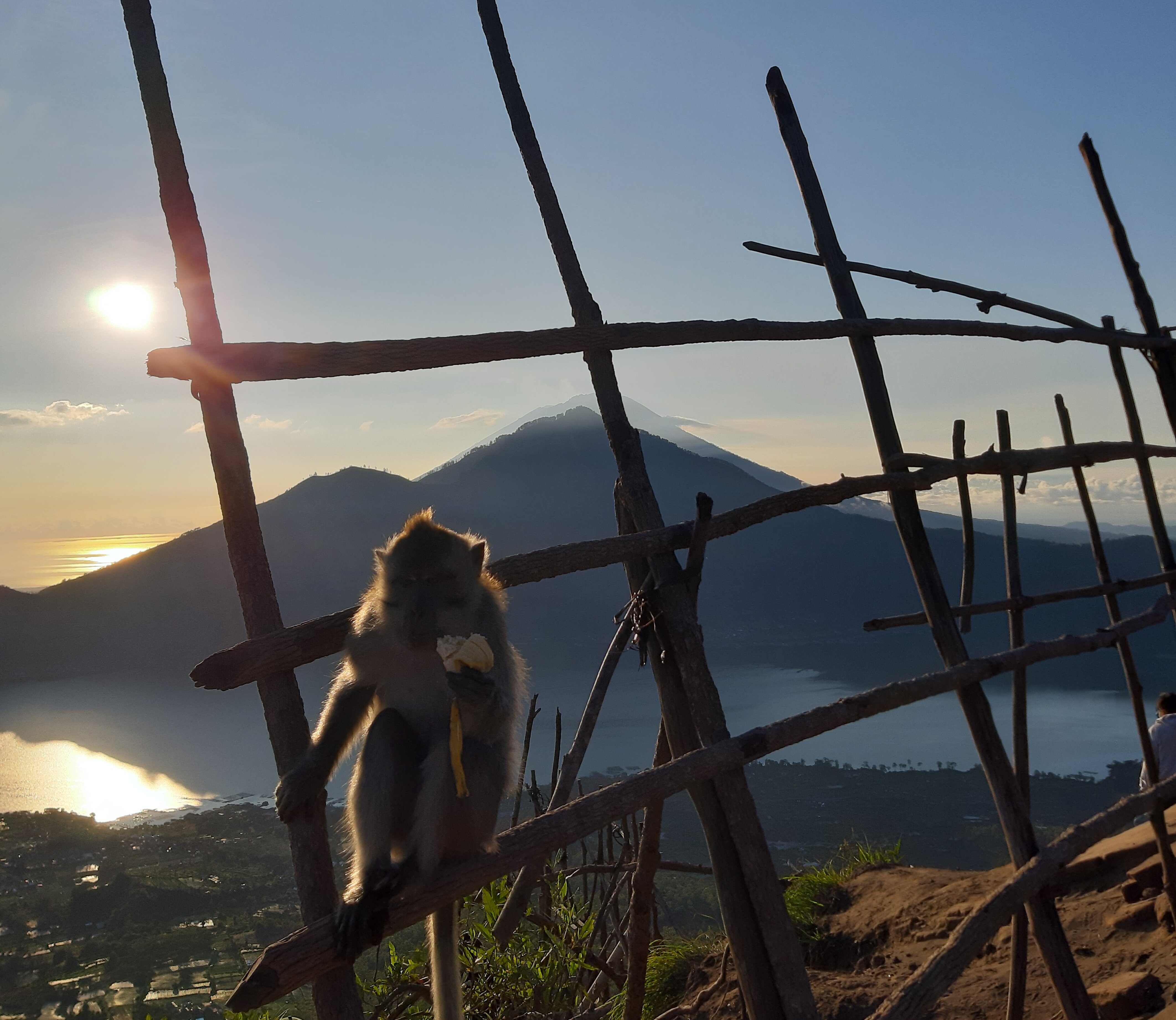 As we navigated the mountain, I was informed that the mountain was actually an active volcano and we were walking along the rim of the caldera. Woah, I had no idea. 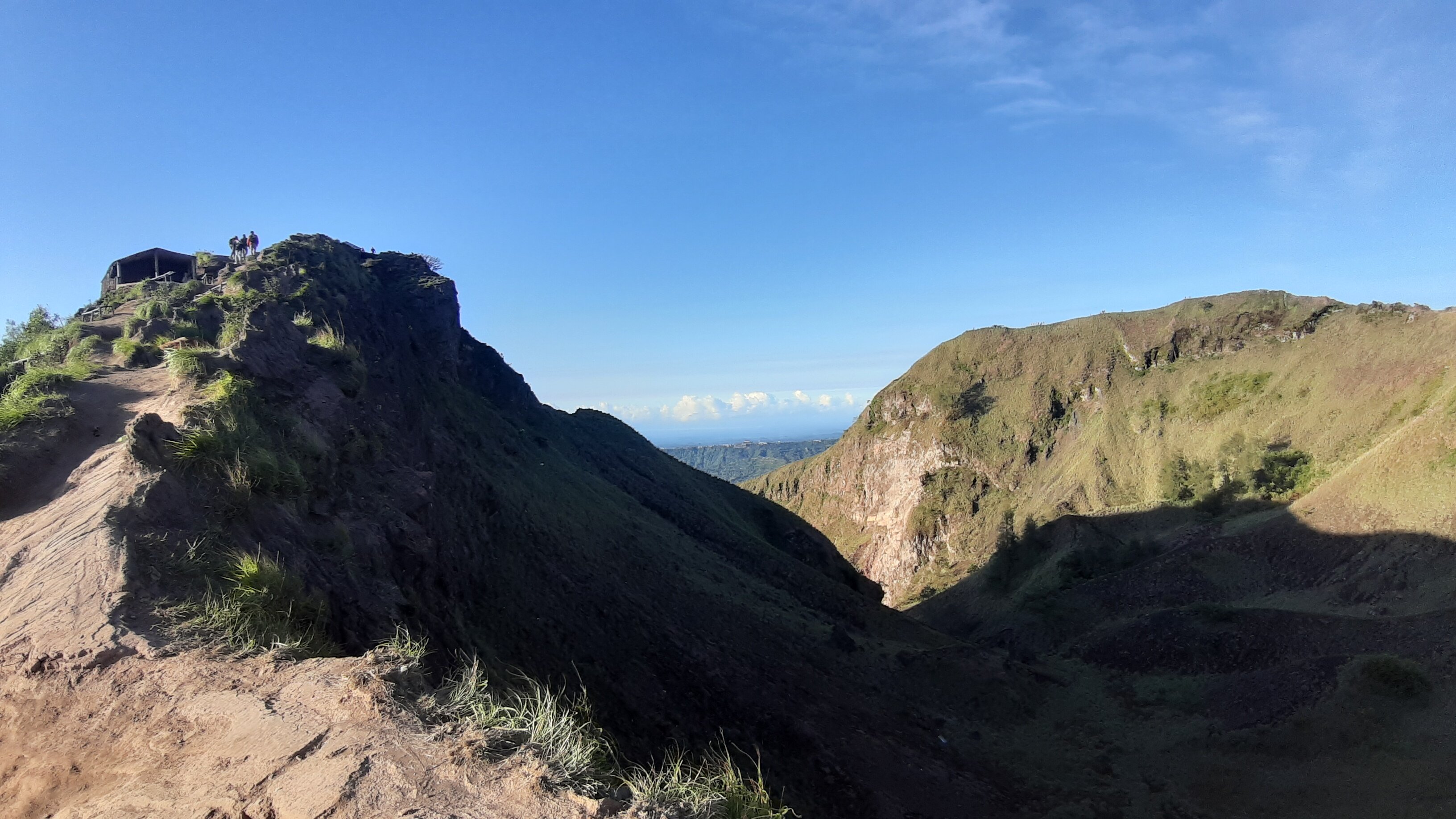 Looking down into the Caldera.

Our group pointed out big plumes of steam from where the volcano was heating the earth. There were a few holes in the ground that you could put your hand into to feel the heat too, and in some places locals were actually boiling water. I then realised that the few coffee shacks that we had passed were using water heated by volcano heat. Cool, volcano coffee.

A family of monkeys took over all of the benches.

We made it down safely too, and I didn’t have any major falls or stumbles. Unlike during my trip to Abang, this time I was wearing brand new shoes. I was able to prove to Ni and the rest of the group that I wasn’t just a clumsy foreigner. I was just a foreigner who didn’t buy new shoes often enough. Incidentally during the descent a bunch of gravel rocks cut up my shoes and damaged them a lot. Oops.

On the way home, we were both so tired. I almost fell asleep several times whilst on the bike, which would be extremely dangerous. In the end Ni had to practice Indonesian words with me to help me focus and stay awake. Or stopping from time for time to get me to run up a hill or do star jumps or something. I cannot overstate how sleepy and drowsy I was.

Ni edited a video using footage that I recorded of the adventure to Batur. It isn’t how I would have edited it, but you can watch it on instagram here, or watch the version that I reuploaded to youtube, below. If you’re happy to watch it on Instagram, please watch it there and give Ni your support!