Kids, Jet has an announcement.
This week, Jet finished all of school!
He worked so hard they gave him a prize - a certificate!
And it’s called a…
– Age Chapman, describing my graduation to her children.

June 28th was results day this year at my University. This year was the final year of my MEng Computer Science degree so I’d be finding out what grade I received.

Two months back, I got the result for my Group Design project, and calculated that I needed an overall average grade of 78% for my remaining modules (Cryptography, Semantic Web, and Automated Code Generation). 78% seemed an insurmountable task given the breadth and difficulty of some of the content in the Cryptography module, the lack of interest I found I had for the Semantic Web module, and the fact that my average mark for most modules (the ones that I did whilst not depressed) was around 75%. The only consolation was that I found the Automated Code Generation module incredibly engaging, felt that it was taught really well, and really wanted to learn more. Thanks, Julian!

Given that I had an awful third year of University in so many different ways, I had known for the whole year that it would be hard for me to get a First. If I had chosen to skip the Master’s degree and graduate with a bachelors last year, I would have gotten a Lower Second Class Honours. Trying to increase by two grade categories with one year (worth 40% of the overall grade) required strong results this year to offset things - I tried all year to give it my best but I didn’t fully believe I capable of it (even though I believed I would have found getting First Class Honours relatively easy if I had enjoyed a better third year of study).

After I completed my exams, I felt that whilst Cryptography’s exam went less well than ideal, the Semantic Web and Automated Code Generation exams went very well, and that if I had gotten the questions correct that I felt were truly correct, then I would graduate with a First Class Honours - just. I thought I’d be painfully borderline and get there on a technicality - if you achieve 69.5% overall across your degree, they round your score up to 70%. It wouldn’t be the first time something like that had happened to me - in A Level Mathematics, you need 90% across the Core 3 and Core 4 exams to achieve an A*. I got 80% in one exam and 100% in the other, leaving me dead on the mark with 90%.

The actual results day crept up on me; I had been focussing on packing or disposing of my things in preparation to move out, as well as cleaning the house so that we get back our £500 deposit, and working as a research assistant. This left little time for thinking about student things, and as such, I had forgotten about it almost completely until Daniel reminded me the day before.

In anticipation of results day, to celebrate having completed our degree, and as a final Hurrah before we left Southampton, Daniel and I chose to go to the Thaikhun Thai Street Food restaurant in Southampton the day before. Daniel intends to start his nomad adventure in Thailand, so it was encouraging for both of us how tasty the food was. 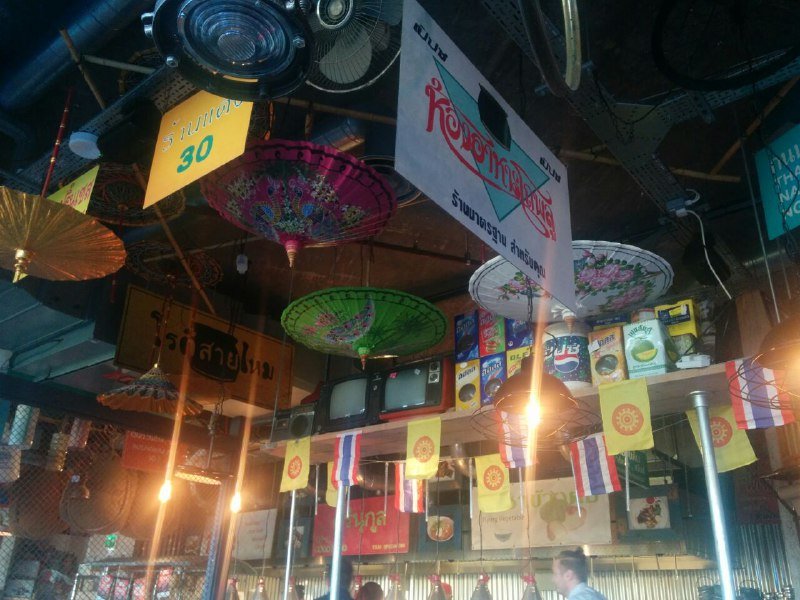 On the eve of results, I dreamed two different dreams whilst I slept. I dreamed that I completely failed to get any grade at all (essentially an impossibility), but that I took the failure in my stride and become a successful musician - a weird thing to dream considering I can’t currently play any instruments! My second dream was that I passed with flying colours, and then not much happened - I just bought Indian food as I would to celebrate many other events.

For all intents and purposes, the outcome didn’t truly matter to me or my future career trajectory - hopefully I’ll never be in a position where having a degree or not matters, and even then, if somebody is considering my degree as an only factor of whether they want to work with me (and not what I can do, my work ethic, etc), then frankly I don’t want to work with them. Even so, as the hours ticked closer to the 2PM when results were released, I got more and more nervous. Whilst I would be somewhat happy to get a first, I knew that I would be much more disappointed with a Upper Second Class degree. I know I can achieve more, and the classification also doesn’t particularly say much about a student as 50% of all students in the UK are awarded that classification.

2PM passed without receiving an email. A month ago, we had also been expecting the feedback from a coursework assignment which never came. Daniel and I joked that the results email was delayed because of the assignment, which helped relieve some of the painful tension. We also continued our running joke of /stress 10, mimicking the Mindful Makers bot format. 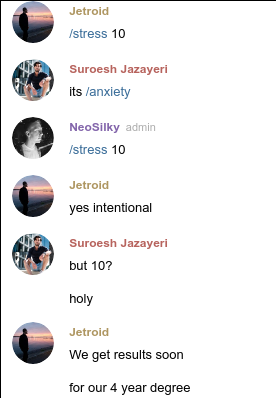 After much refreshing of my email client, at 2:29PM, Dan received his email and started getting excited about his module marks - for him, the First Class Honours degree classification was an almost foregone conclusion, so I can understand why he’d be particularly excited about a high module mark. Still, it didn’t help my anxiety!

Two minutes later, I received my email, and my hands were shaking so much I struggled to click the email.

The email starts off with your module marks - wow, everything looks goooooooood! 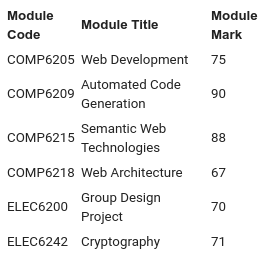 …and then has this beautiful piece of text:

And not only that, but I did it legit without using the 69.5% rounding loophole. 70.305%! Almost a whole percent above the cutoff! I also did better in every summer exam than I had predicted.

Dan was incredibly excited for me! Perhaps more than I was - I was still in shock, I think. 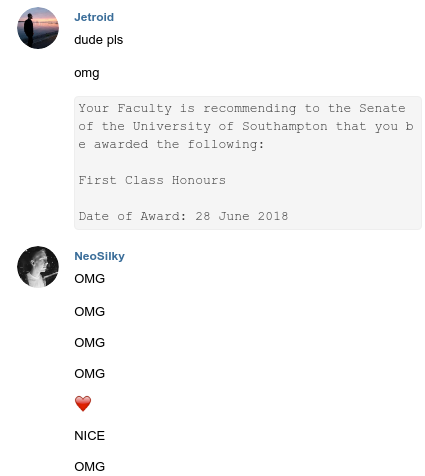 I also naturally told my family. My Mom and I had a very sweet phone call. My sister cried because my achievement made her really happy; she also posted emotional messages about it to her Facebook followers.

My Father had some choice words:

Dan and I also posted to M2, and we received lots of love from that great, supportive community.

I also told Age and George, the Doctors that I am working with to produce a research paper, and they were very excited for me too! A few days later, Age even told her kids about it over dinner, much to my embarrassment. The kids were too young to really understand what it meant, and I am always embarrassed to have other people talk about my achievements, so it was a little awkward all around.

I’d already decided a few months ago that I didn’t want to attend the graduation ceremony - It seemed expensive and I suspected it would be a lot of boring posing, too long watching people I didn’t know receive their degrees, and far too much tedious, pointless ‘networking’.

The next day, when I arrived to the research lab, I found that the card reader was denying my student ID - oh right, I’m not a student because I technically graduated! Oops! Guess I need a new card!

Overall, I’m happier with a First Class Honours than I thought I would be. I feel that this classification symbolically represents the difficulty I had with depression, as well as the effort it took to overcome it and compensate for the lost marks. It was a lot of work to get to this conclusion from the ‘unwinnable’ position I found myself in at the start of the year. I know how hard some of the University Experience was for me, and this award shows that even under the most adverse circumstances, the most hopeless odds, I can overcome them and achieve what I need to.

I still don’t think the actual qualification means much of anything, but I’m glad that I have it. A degree doesn’t mean much in the indie/tech world - it’s more important if you have a specific set of skills and abilities, and a degree doesn’t really represent that. In tech, many of the ‘rockstar’ programmers/makers/CEOs do not have degrees, and many of those individuals who do have degrees produce bad work. Even at my University, there are a few select people that graduated with First Class Honours whom I know to be somewhat incompetent. The fact that I was able to get a First Class despite my screwed up third year also implies to me that perhaps degrees are too easy.

All I have to do now is collect my certificate once it has been printed.

And pay off the tens of thousands of debt I have accrued. But let’s not worry about that.