Four years ago, during my first year of University, I wanted to start taking up some sports and work on my fitness. I hadn’t really been active in my teen nor adult life so far due to a big health issue, so I felt like the first step for me might be to try running.

I went to my local Sports Direct store in Southampton, spoke to a lady in the store and told her about what I wanted, and she helped me measure my feet and get the best shoe for my foot shape and intended activities.

I ended up with a pair of Karrimor Tempo 3 running shoes. They fit fairly well, were comfortable, and generally I liked them. The lady even gave me a pair of squishy gel insoles for free because I was a first time runner, to provide extra cushioning and to reduce the bacterial build up. My fitness was really bad at first and I’d struggle to even run 100m but that wasn’t the fault of the shoe. 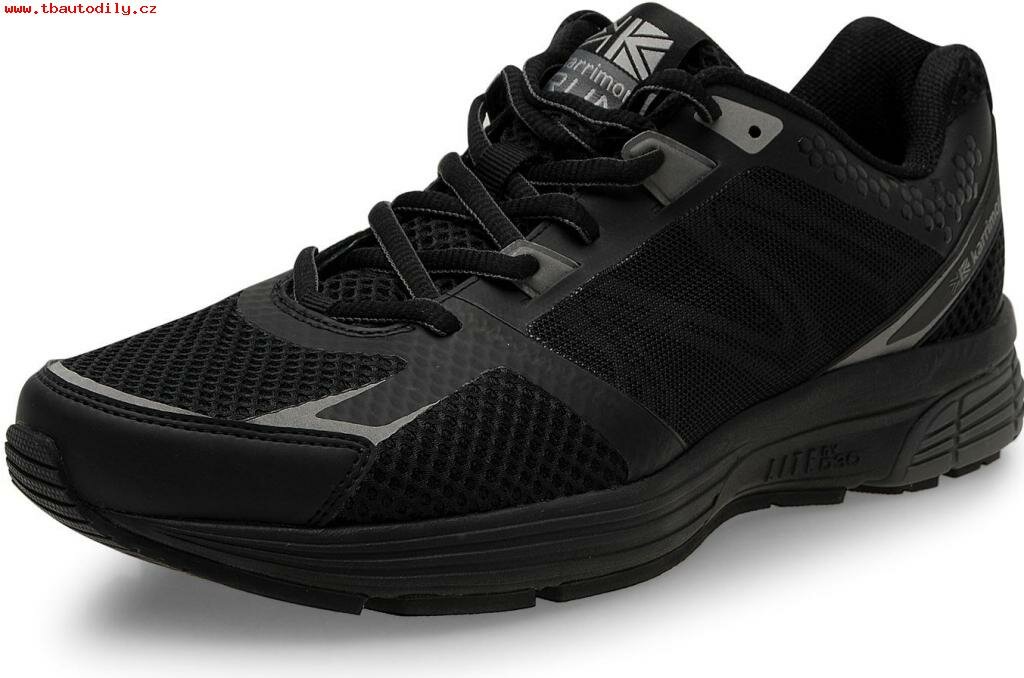 I ran three miles with them every morning on my way to my 12-week Summer Internship that year. I had to take copious breaks even on that 3 mile journey as I was still unfit, but I did it. They say that a heavier runner should replace their should after 300 miles, but for my internship alone I used them for 180.

I also used them every week for the semester after that as I went to the gym, where I’d often run a lot on the treadmill during winter. (I hated running at this point as I was quite overweight. I’d have to make myself a promise like “You can’t stop running until this album is over” and then just get on the treadmill and run. A friend of a friend saw me doing this at the time and I remember her describing me running like a machine, which felt great to hear.) They got pretty worn out. The whites were more a stained yellow, the pattern on the sole was gone, and the gel insole was disintegrating.

In my third year I didn’t make much use of them because I was having some mental health issues, but I did end up falling into the Riven Itchen with them a few times when I was first trying out Kayaking. I beat them pretty hard after I had recovered a little - I went to the gym pretty much every day during the summer to do all kinds of cardio and weight exercises to both help keep my mental health at bay and to burn off some of those 20kg I had gained.

By my fourth year of university, it was obviously time to replace them. Part of the netting on the side had burst, some parts of the tread were peeling from the sole, and the whole sole itself was disconnecting from the cloth. I went again to the Sports Direct shop and looked at the shoes. Many of them looked really nice - in fact there were so many that could work for me that it was hard to choose from. In the end I didn’t choose. I decided to be stubborn and frugal and keep what I had. I got out some glue to make a few repairs where I could, and cut off some damaged parts where I couldn’t.

My repairs kept them going strong, and I was able to keep going with my fitness. I ran 5km in them a dozen or so times on the Saturday 9AM Park Run. I also ran a bunch of loops around the beautiful Riverside Park during exam season. When I got back to my dad’s to work on [Frequency Central] projects, I ran around the countryside there too.

They became my only pair of shoes when I left to travel. They started really falling apart by the time I visited my friend Matej in Nova Gradiška. I took the liberty of using the sewing kit in my hotel room to repair them, which helped, but the rubber materials at the front were thick and my needle shattered when I tried to repair them fully.

In Bangkok, I lost a whole chunk of rubber just by walking around in them. During my time in Chiang Mai, I have been running a lot here; I have even managed to extend my furthest distance ran in one go to 15km. A huge improvement (150x) considering I used to struggle to run 100m.

Today though, they are falling apart again and I don’t have any materials to repair them with. They look terrible. I joke that they are proof I am homeless every time somebody mentions them to me, but really even homeless people have better shoes. It’s time to replace them. 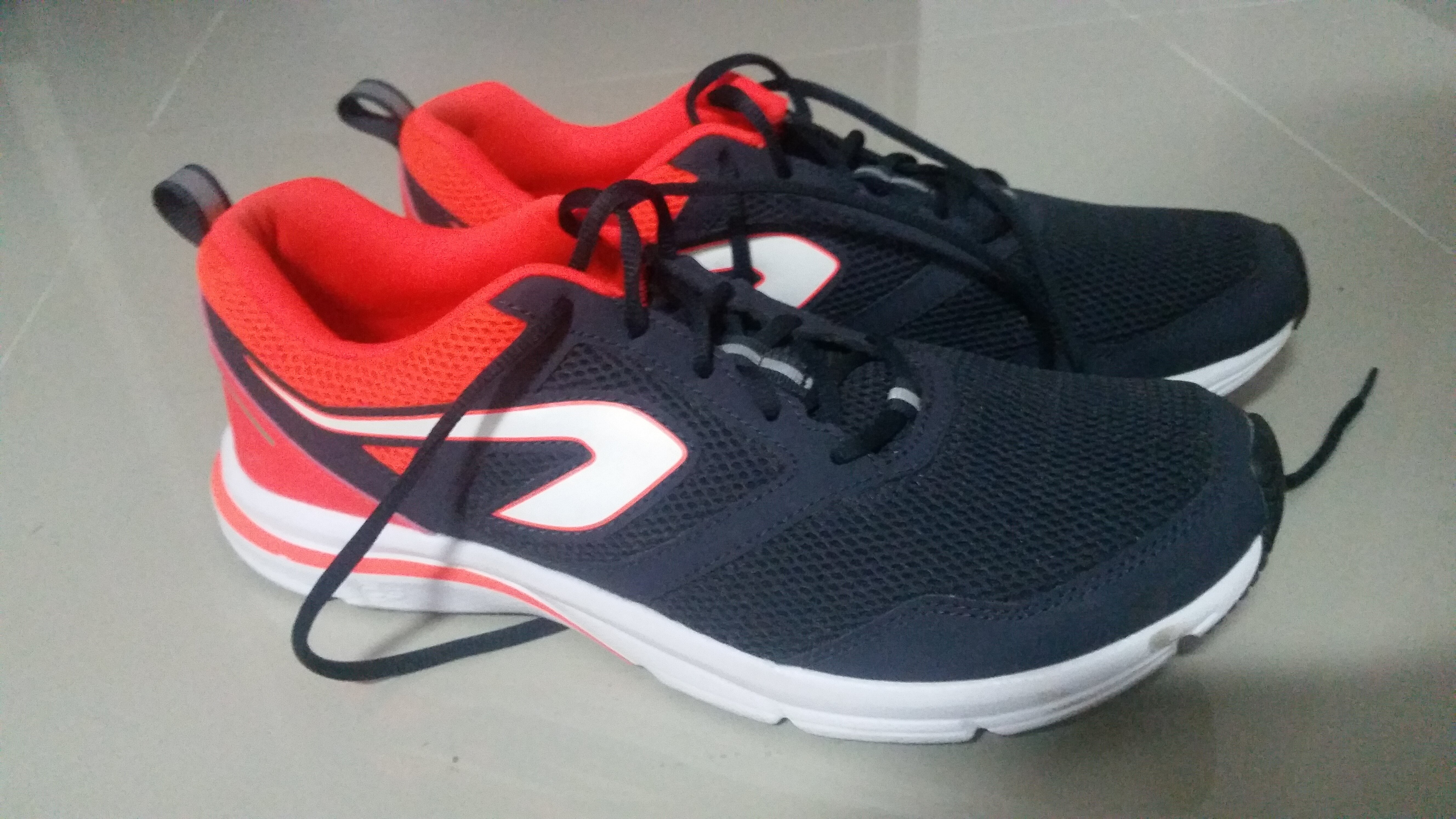 Below is a gallery showing the damage. 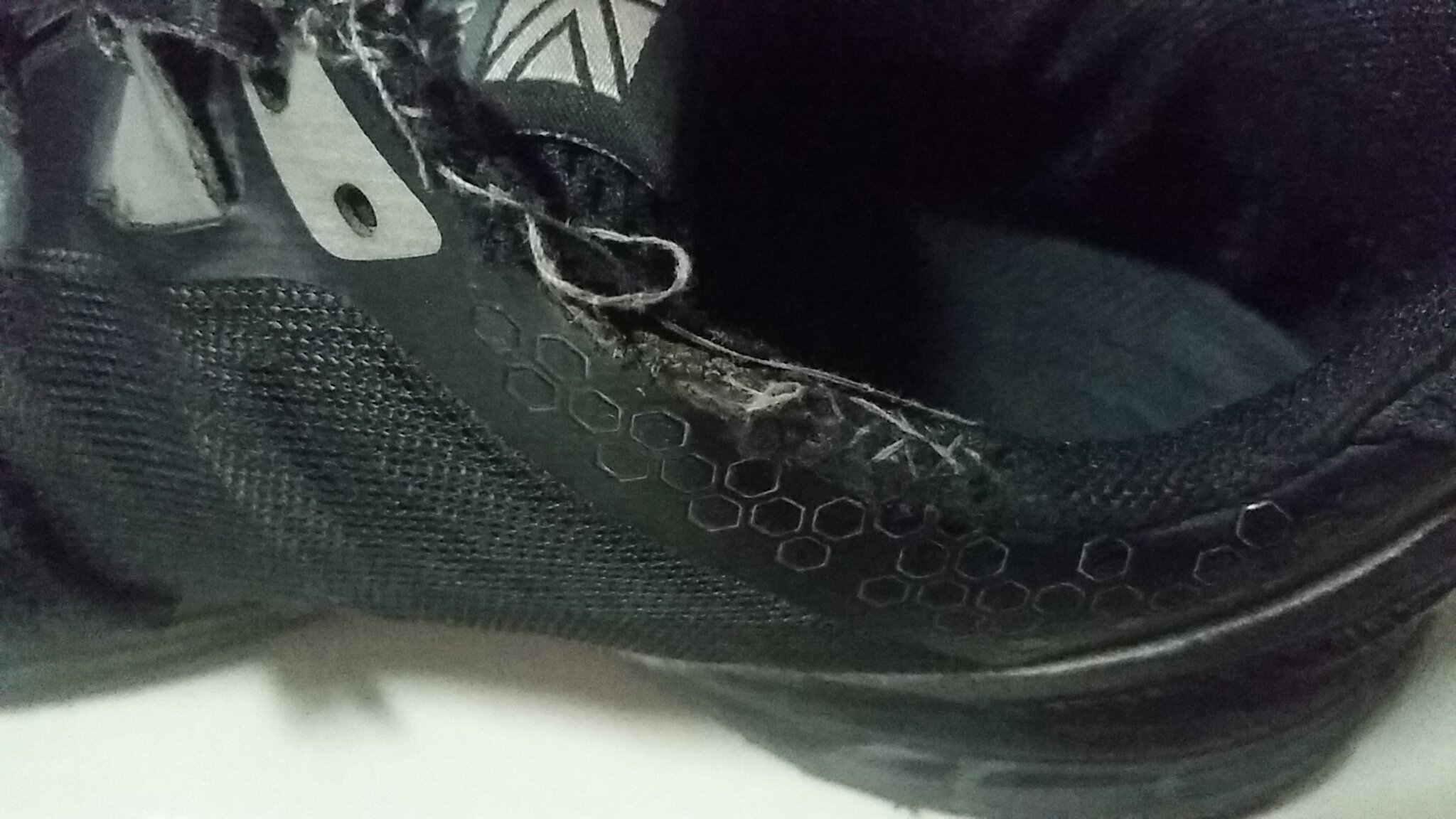 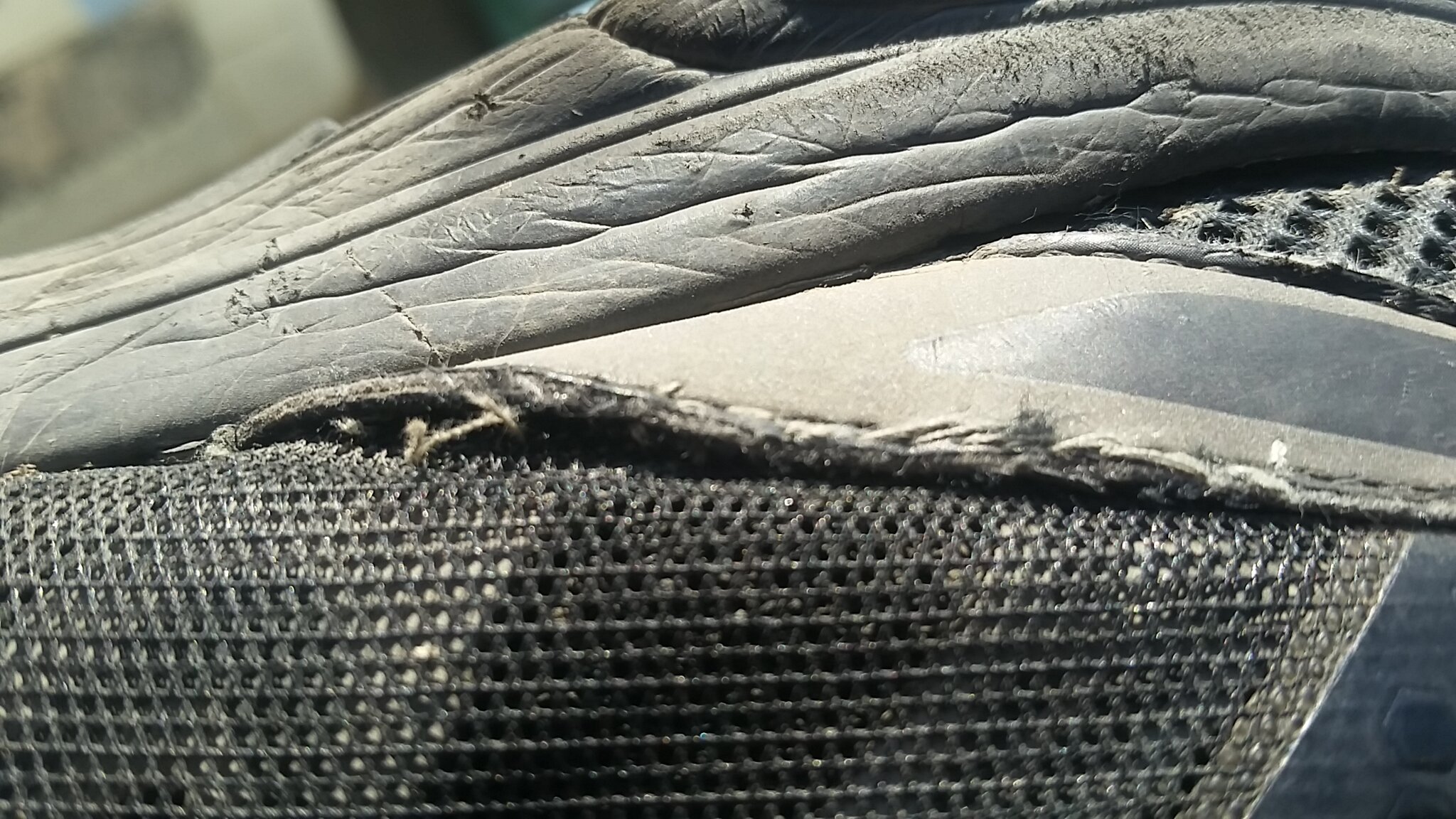 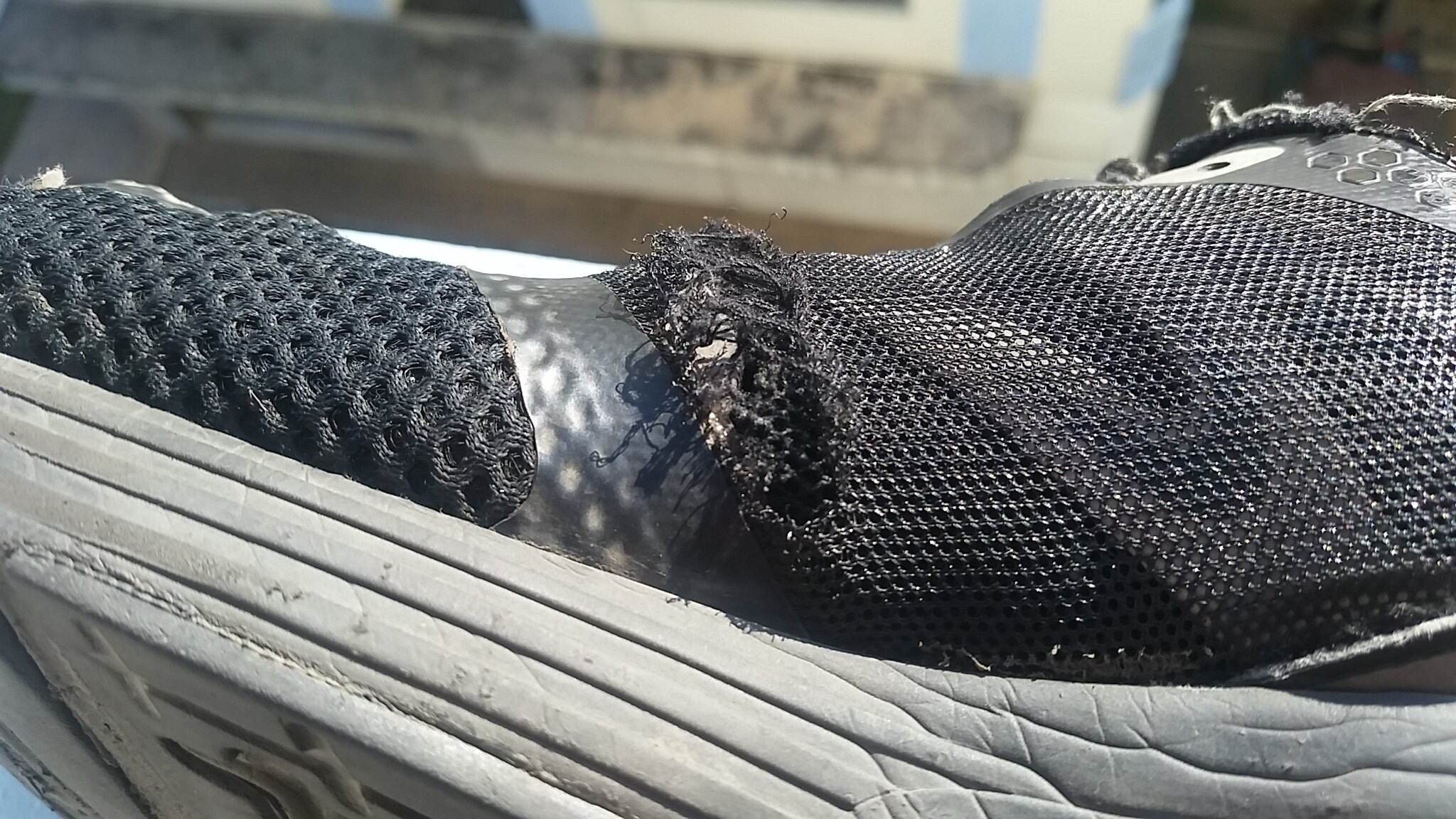 A ripped piece of netting on the side of the shoe. 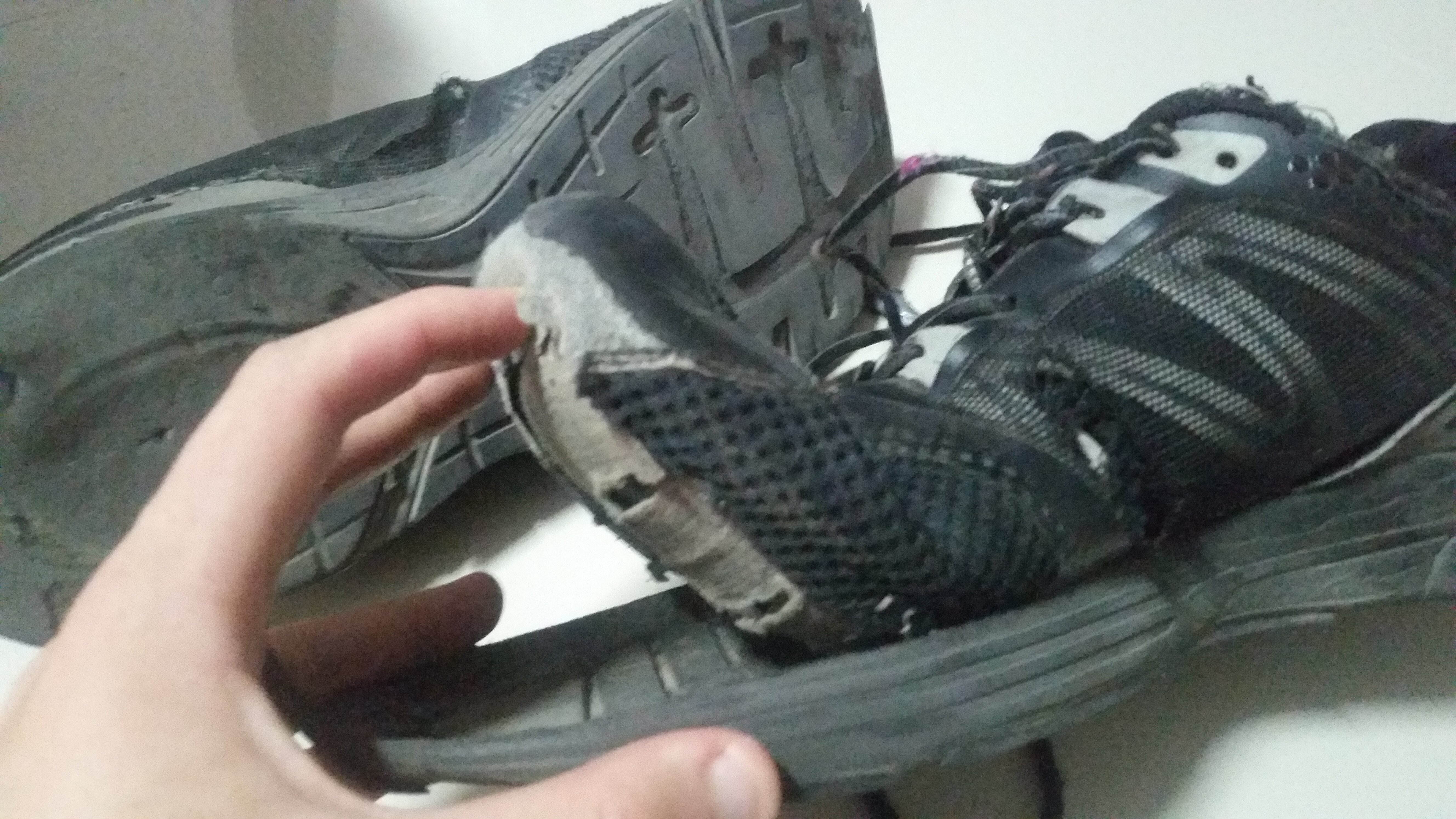 Uh, yeah. Note also the big pieces of missing tread on the shoe in the background. 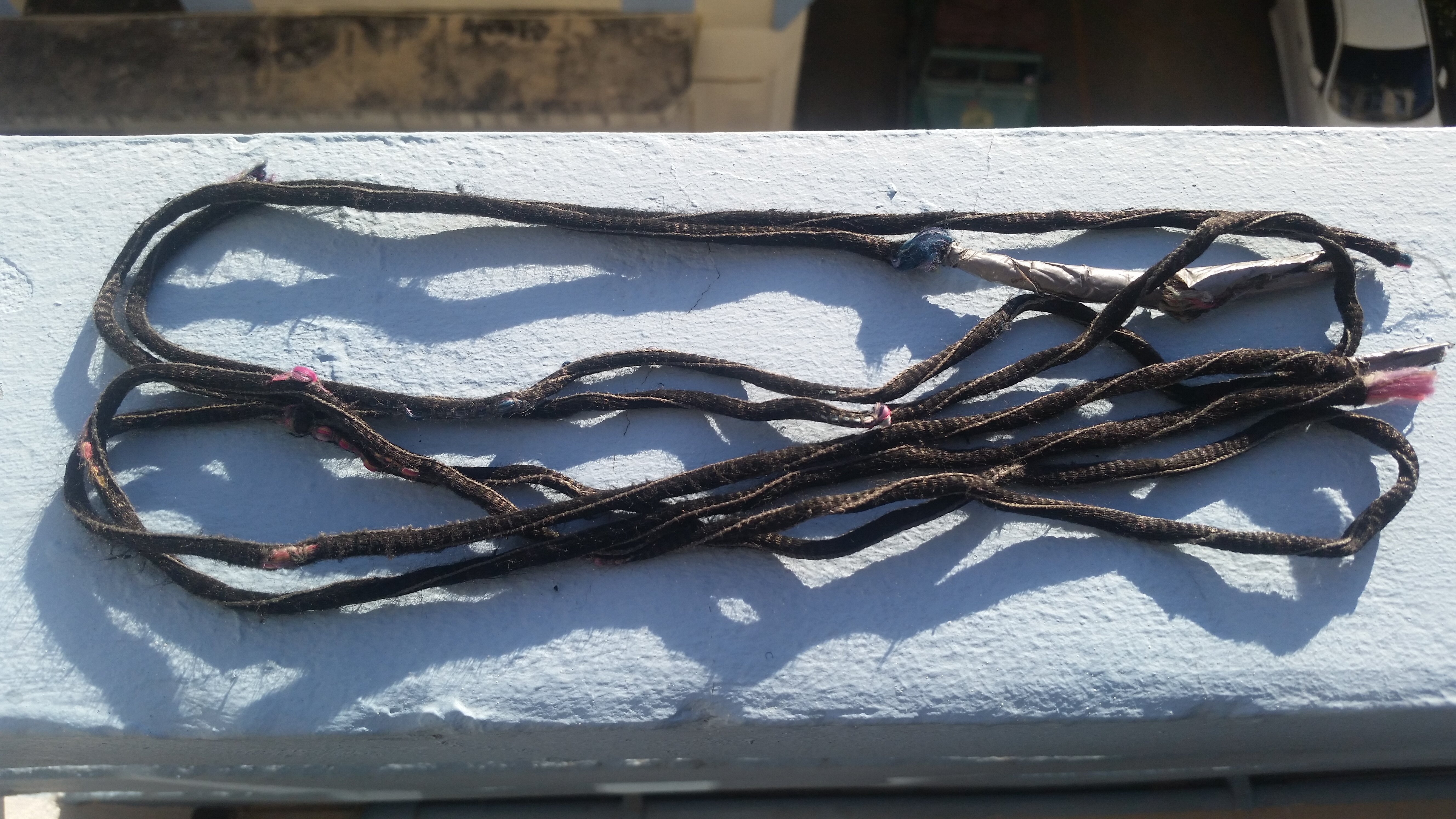 The laces have been shredded and bursting out pieces of colourful fluff for two years. I fixed the ends with duct tape when the got too bad.